We brought Mojo to the park yesterday for a run, and I noticed something really strange: when he runs, he pulls himself along with his front legs. I would have thought he sprung off of his hind legs like a rabbit, and he does. But it looks like most of his power/force comes from pulling himself forwards, not bouncing off his hind legs.

His hind legs' function seems to be to give him a base so he can extend his body. He then pulls himself forwards.

Dunno, I always thought he sprung forward, landed on his front paws, then sprung again on his back paws.

Mojo was at daycare yesterday, and was as pooped as ever. He was there for almost 11 hours, and there were 12 dogs. All that running around tired him out. He's a bit slow today, too.

He's starting to get mats all over, but most of the ones I combed out today were on his shoulders. We're going to the vet today to get his health certificate, since we're bringing him to NY over the holidays. We even got a bigger sherpa. He got a bit too long to fit in the old one.

This is Mojo with Ela's rum & plum cakes. 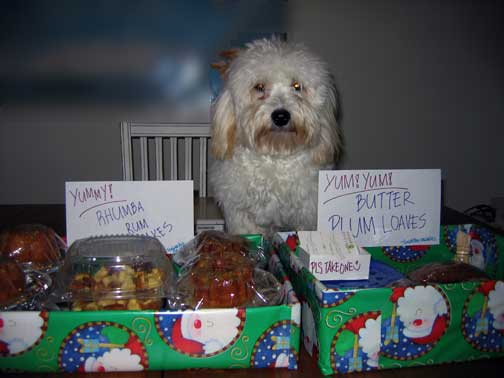 On the stairs, looking downstairs. 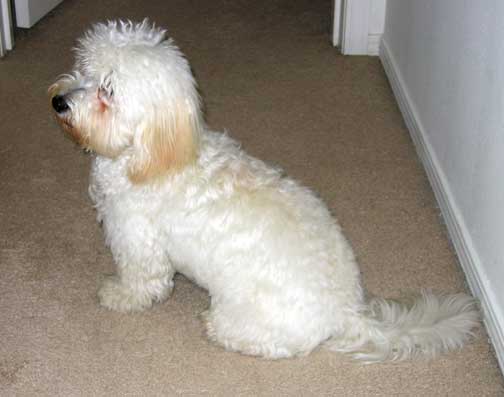 This is what Mojo sees when we leave. 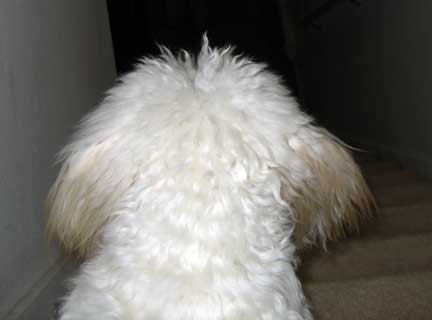 Looks like we're in for more excitement from Mojo:


Now we know where that chewing phase came from. That "Heightened exploration of dominance" makes me nervous. He's getting more pushy lately, bringing us toys (mainly socks) and growling to play. He's also been nipping & biting our hands, trying to get us to play.

We bring him places now, leaving him in the car if he can't go with us. It's kind of chilly, so there's no danger of overheating. It's really neat to see Mojo's head sticking up looking for us when we go back to the car. And he doesn't seem to bark in the car anymore, though he did growl when we went through the drive-through bank this morning. I think that's because he couldn't see the teller very well, due to his hair covering his eyes. He was fine when she came back to the window.