Also Mojo did some heavy mental lifting today. One of the things we do to play is throw this small stuffed duck around. Mojo goes and finds it, then brings it back. Repeat.

We were playing last night, and the duck landed in a hard-to-get-to spot. Mojo couldn't quite figure out how to get it, so we helped him out. He had to jump onto a chair, then reach over and grab the duck.

Today, I put the duck on top of a yoga ball, and told Mojo to get the duck. He pushed the ball, which made the duck fall off. The problem was he still couldn't get to the duck because it was behind the yoga ball. In fact, there was no way to get to the duck...except by going through the tunnel thing we built. He kind of figured this out, then went through the tunnel, picked the duck, then came out. Whoa! What's more amazing is he did it twice, the second time so I could show Ela.

The funny thing is he had to figure it out each time. He didn't remember what he did the second time, and we could see his brain cranking away trying to find a way to get to the duck.

Well, I guess you had to be there. It's just neat seeing him thinking hard, and coming up with solutions to dog-level problems.

Blogger's been screwing up mightily for the las day or two, so posting may be intermittent.

There seems to be a dog outing in the park behind us at around 8am or so. I was walking Mojo out there this morning, and first we saw a small dog on a little hill. Mojo saw him immediately, and stood there looking at him...so we went over. It was a shi tzu named boomer, and he was off leash. Boomer was joined by a terrier named coco, then a woman came over with a small pom, a small daschund, and a shi tzu puppy. It was a dog-fest! I dropped Mojo's leash and let him play with the other dogs (who were playing amongst themselves).

One funny scene was when the puppy and Mojo were playing, the puppy would grab Mojo's leash and Mojo would sit there while it would hop up & bite at Mojo. Plus, Mojo would lie down to let the puppy play with him. Nice!

Then Plop the poodle came by, and Mojo greeted him by humping him.

After a bit more play, we all had to go our separate ways.

It was a small-dog festival, and nice because everyone was off-leash and mostly under control. Luckily no big dogs were around, and no other park-goers.

Here's a picture of Mojo from his younger days!

We built a makeshift agility tunnel a few months ago. It subsequently collapsed, and was rebuilt the other day. I'm no carpenter, that's for sure.

Anyway, here are some nice pictures of Mojo and the tunnel.

At first, he wasn't sure exactly what he was supposed to be doing there.

Then he realized he was supposed to go to the end then sit down. 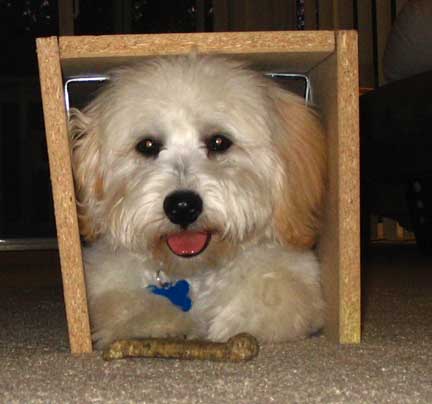 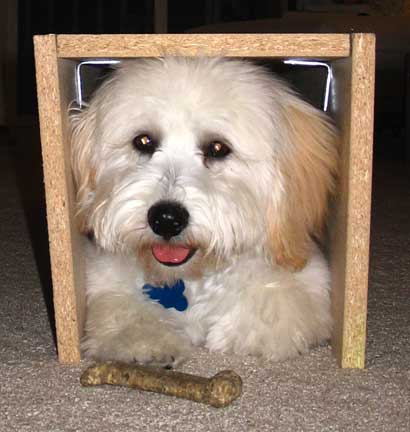 This is getting kinda boring. 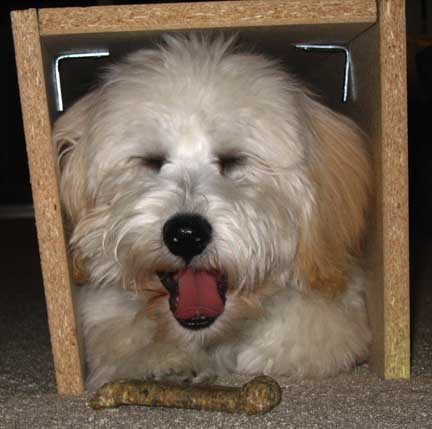 Eventually he did run through it, but it's so much smaller than the normal agility tunnel that it's harder for him to get through it. It does the job, mostly.

Mojo's stomach must have gotten stronger lately, because we fed him a bowl of Eukanuba puppy food (we've got a lot of it left over) and his poo was as firm as ever. Usually food changes have been quickly followed by soft poops as his stomach adjusts to the new food. Soft poo no more! This is good, since we can feed him whatever we want with no transition period. I'm not sure what other food we'd feed him (he still doesn't like Blue), but I'm sure we'll find something.

Well damn, Mojo lost another tooth. There can't be that many more, but I can't see the back teeth that well.

Mojo was down on the floor next to my desk, then started growling and barking. I looked outside, and someone was walking by with flip-flops on. I pulled Mojo up to the desk, and he sat right in front of the window looking at the woman walking by. I put him down, then a few minutes later growls and barks...and the same woman was walking by again. Up he came again, and he watched as the woman walked the other way. So he either growls at the sound of flip-flops or some particular woman drives him crazy. I think it's the flip-flops, personally.

It looks like all his baby teeth are gone. It's hard to tell, but when he chomps on my fingers I peek into his mouth and all his teeth look big...and sharp. Adult teeth really do look different than baby teeth. The baby teeth were small and fine-looking. These teeth look, well, big and sharp.

Oh, funny thing. We were at Cedar Hills yesterday and ran into some of our petsmart class! Jenna's dad (the black lab) was there and said hi, and we ran into Riley and his parents. Small World!

Mojo pondering the existence of multiple instances of the same thing. "How can this possible? Is there just one ball, and the other two are copies? Why do they look the same, but taste different?" 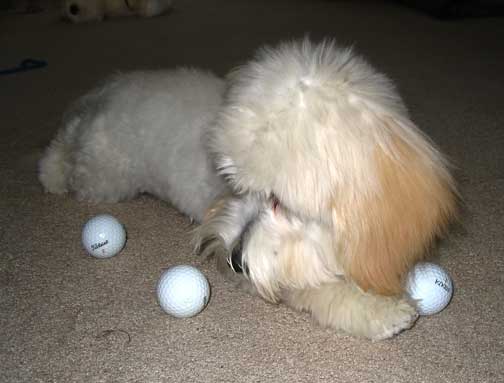 We've probably got enough of Mojo's teeth to build him a new set!

This morning, he played with the poodle for a long time, then came home and had a bath. I've never seen the poodle, but Ela always seems to see them when she's out with Mojo in the AM. Go figure.

Anyway, over the past few weeks Mojo's gotten a lot better with dogs. I'm not sure why, maybe it started at agility class. But with the bigger dogs, Mojo now stands up at them (to make himself bigger?) and actively goes up to them to say hello. With dogs his size, he's friendly too. At agility, he gets distracted because of the bigger dogs, specifically Abby the Chocolate Lab. I guess he just wants to play during class...

As far as we can tell, the next class is the last class in agility 1. It seems kind of short, and there's a lot of stuff we haven't done, like those bars that the dogs walk through. Plus some of the other dogs aren't doing so well at some of the obstacles. Even Mojo could use more practice. Plus it's fun running the course!

I think we'll head to puppy agility 2, just to see what's next. After that, Ela wants him to get his canine good citizen certification, so we might do agility 2 and the kgc concurrently?