Whoa, I was scratching Mojo and discovered these huge mats on his ears. They must have just happened today, because I sort of remember combing Mojo yesterday.

They've gotten too big to untangle, so I cut one of them out. The other one is too big right now to cut, and Mojo's not cooperating. Ela untangles them, but these mats are really big.

I wonder what's up with them?

As always, Mojo was pooped when he came back from daycare. He ate a bowl of food, drank water, then went to sleep. He's so tired that when I went downstairs, he stayed upstairs.

Looks like I'll have to give him a bath soon. The hair around his mouth is kinda stiff. Drinking then eating? Beats me. I think I can just wash his mouth area.

Mojo sleeps out in the hallway or on the floor now, thanks to his sporadic loss of bladder control when on the bed.

The other day he was really sleepy, hopped onto the bed, then for some reason unloaded his bladder on our comforter. That resulted in a lot of nature's miracle being sprayed around, and Mojo sleeping out in the hallway. Last night he slept in the room, but on the floor. I actually woke up just before he tried to jump onto the bed, and told him "off," which means I woke up around 6 times.

He did get the idea, however much he didn't like it. I think by now he's realized that peeing on the bed is a no-no.

Anyhow, he's in daycare right now, and it looks like he's having a blast!

Agility day was yesterday, and he got elevated to the advanced class :) He's just really good at it. He's having problems with the see-saw, though. He doesn't like the tilting motion, so he had to be coaxed with massive amounts of treats. Cheese alone wouldn't do it; I had to use the hot dogs from the instructor.

Still, it was pretty fun. He's willing to work at a distance, and he really, really, really likes other people & dogs. He likes us a lot, but we're not dogs :)

Sitting around on the office chair... 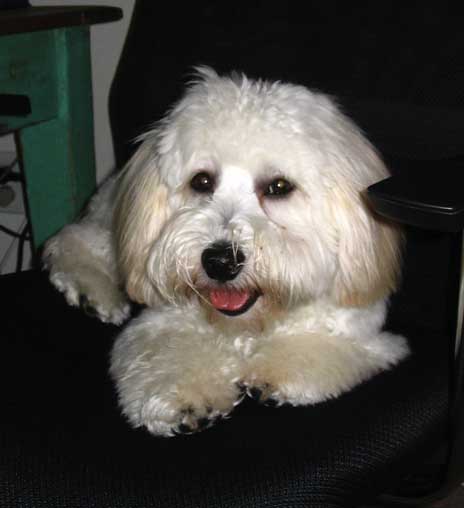 Looking out the window, watching what's happening on our street. 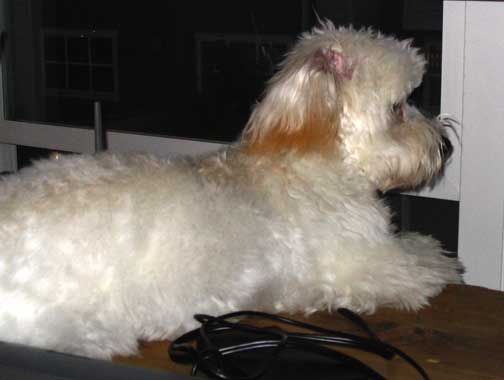 Hold still while I strap these legs onto ye, matey! Arrgh! 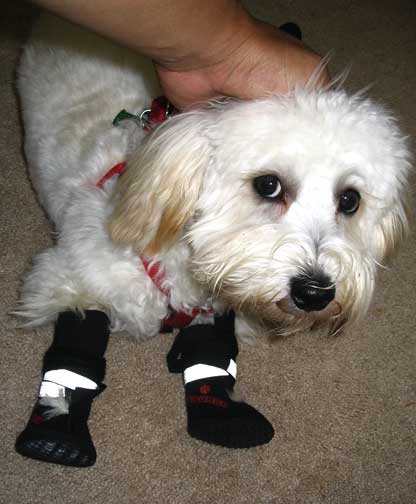 Mojo's booties arrived, and boy do they look silly! They didn't stay on long, due to some design problems. However, they'll be a good model moving forwards, I think.

Maybe we should have named Mojo "Akimbo" instead? 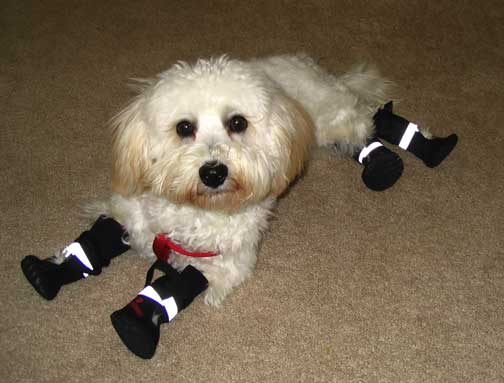 Oh, the red weal-like thing on his incision is gone. It was an infection! His last pill will be tonight.

I tried a new game with him today. We have a lot of cheese, obviously, and a lot of it is sliced up into tiny treat-sized cubes. They're mainly for agility training, because he doesn't have to chew them.

The game is basically standing there and throwing small cubes of cheese around the apartment, and watching Mojo fetch them. It's not much of a game, I know, but what can you do?

It's interesting, because Mojo really uses his ears and eyes first. He hears the impact of the cheese then looks in the area to see it bouncing around. If he can't see it, then he'll go and sniff.

The problem is that if he doesn't see anything, he doesn't know where to start sniffing around. When he starts sniffing I'm trying to guide him, but I'm not sure what to say, and I'm not sure if he knows why I'm talking.

Some of his toys smell really terrible now. Weeks of dog saliva are taking their toll on the stuffed animals. I guess I'll have to figure out how to wash them soon.

It's been a few days since the last entry. It's not so much that there's a lot going on, it's just Mojo's kind of annyoing.

Mojo's gotten a lot more clingy now that Ela's gone. It's annoying, because instead of sitting on the desk near the window he suddenly wants to sit on my desk.

He also barks and bites more. The "no bite" campaign is failing miserably. He barks at night at peope that walk by. I remember now that most of the Havs at Diane's were barking too. Hmm.

He jumps up more on people who try and pet him.

The other day I found these weird food-like particles in his beard/chin. They were all tangled up in his hair, and it was a bear getting them out.

And he dug up a part of the carpet last night. Doh! He has a tearing/rending need that's being unfulfilled, so he decided to bite and rend at the carpet.

Maybe he is getting bad habits in daycare?

We went to the park yesterday, which was fun. Mojo always loves going to the park. The new thing is he went down a path leading towards the stream, which he's never done before.