Last night Mojo was licking his right paw excessively - it was pretty much soaked. That's usually a sign of an allergy, so we thought it might be food-related.

Well, this morning we fed him the wysong alone, and no licking. doh!

He also barfed or something this morning while we were out. Boy, he smelled terrible! He was a little furry bundle of miasma. The smell trailed him, like PigPen in Peanuts. Whew. So he got a bath, and now he's fluffy, but more importantly, he smells OK. Whew!

We went and got some Nature's Miracle too, to mop up the smelly area. Yech.

Mojo looking bedraggled after his involuntary bath the other day. 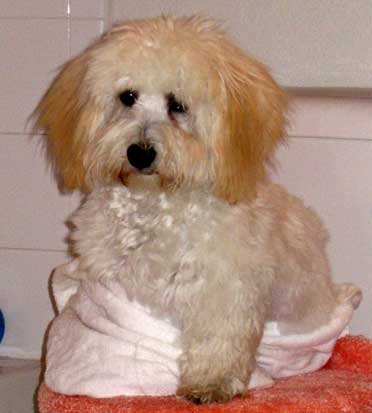 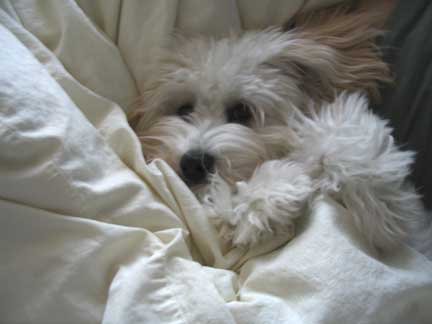 It's not hot, so we're not sure why he jumped into the tub. He definitely was whining, asking us to turn the water on. 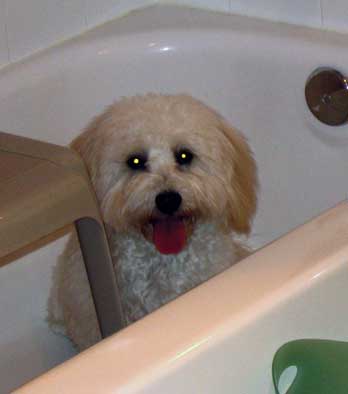 Mojo's trip to the vet went as expected. 6 or so days until he can be at full speed. I think he'll be OK once the scabs fall off.

He's getting smaller. Physically he seems to have shrunk a bit. It's not hair, either. He hasn't been eating as much, so maybe the lack of hormones is having its effect. Or maybe he's using all that excess energy healing? He's not really getting much exercise, which would (should) also reduce his food intake.

This means that we can bring him to agility next week as a drop-in! It's raining, but the ring is covered so that shouldn't be a problem.

Today was a shop-for-Mojo day down at Western Pet Supply. We were mainly shopping for adult dog food, since their selection's pretty good.

We picked up a 4-lb bag of Wysong canine Maintenance Dog Food, a 1.5lb bag of Chicken Soup for the Dog Lover's Soul adult formula, and a free sample of some kind of raw turkey dog food. We figured we might as well try adult dog foods on him now, so when his Chicken Soup puppy blend runs out we won't be figuring out what to feed him.

We also got a step-in harness, which is much much nicer than the one we had. The one we had first (which is now too small) is a figure-eight kind of thing, where one hole goes over his head and the other clips under his torso. The one we got recently is more of a clover: his head goes in one hole, his left foot goes through the other hole, and it clips around his other leg. Yep, it's complicated.

This one is easy. It's a figure-eight, but you put his feet in the holes then click it on his back. It's called a step-in harness, and it's -so- much easier to get him in and out of. Amazing.

So Mojo ate the turkey (obviously). Raw food is just too expensive, but it's kind of neat I guess. I think the Chicken Soup for Adults was OK. He really liked the Wysong, and munched down all of it.

I think what we'll try & do is mix his food instead of sticking to a brand. The downside to today's food experiment was his poop was soft - and he subsequently stepped on it and tracked it all over the upstairs hallway carpet. Yuck - instant bath time for Mojo. It's time to get Nature's Miracle, since Oxy Clean doesn't quite have the power.

We cut the activity down today, because this afternoon we saw some shinyness on the incision. To us, that meant that the incision was seeping a bit of blood, which means that he was too active and probably opened it a bit. Doh! We'll see what the vet says tomorrow.

We were out all day, and Mojo was really excited when we got home. I think he's basically back to normal. The incision is healing well, and he seems to be behaving the same. We'll bring him to the vet on Monday for a followup.

Mojo's been jumping & running around since we got home, and I guess the incision hasn't opened, but you never know. He's going kind of stir-crazy. It's kind of bugging us, too. We know he wants to go outside, run around, etc, but he can't. Tomorrow we'll try some stuff and see.

As a side note, it's kind of fun to see what ads show up. I just lookek at the blog, and I saw a bunch of ads for dog biting. Before, there were lots of agility links. I wonder how often these pages get reindexed?

Mojo a bit after the surgery. 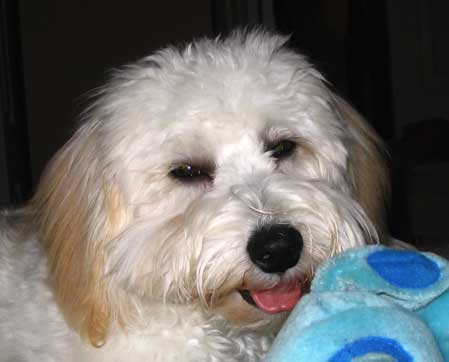