Today we went to the dog show! There was a dog show at the expo center, and it was a perfect opportunity for socialization. Plus there were a ton of vendors there, so we could pick up a bunch of free stuff!

On the way there, Mojo poo'd in the car. That was a good thing, because we put a pad in the back of the car. The bad thing was he stepped on the poo, so we had to stop & clean some stuff up. Yuck.

The show was great! It was another meet-the-Mojo festival; people were coming up, saying hello to Mojo, and asking what he was/where we got him and all that. We should get a commission from Diane the breeder, from all the references!

Ela walked Mojo through the hall, and both of them were really good. Mojo met a whole bunch of other dogs, and actually initiated dog contact for the first time! Well he sort of said hi to a bunch of dogs, but reall started in with a Shiba. He was doing play bows, and some barking, and hopping. Wow, how about that?

He also got to see big dogs, like St. Bernards, Great Danes, and normal dogs like Retrievers and Labs. I think he was sort of pleasantly surprised and vaguely put out that so many dogs ignored him. I think the big dogs just didn't notice him.

Plus, he got the normal amount of attention he gets when he goes out - which he loved immensely. It took us about 3 hours to get through the show, because we got free stuff at every booth and the "what kind of dog is that?" questions. We now have around 18lbs of sample dog foods which we're going to use as treats, and a whole bunch of super-premium dog food marketing propaganda.

So maybe we'll be change over from Eukanuba to one of the other foods. The problem is, how do you know if Mojo likes it, and is it really better? I mean sure, better ingredients, but what does that get you? And given all these dog foods, which one should we choose?

After today's set of shots, Mojo was under-the-weather. 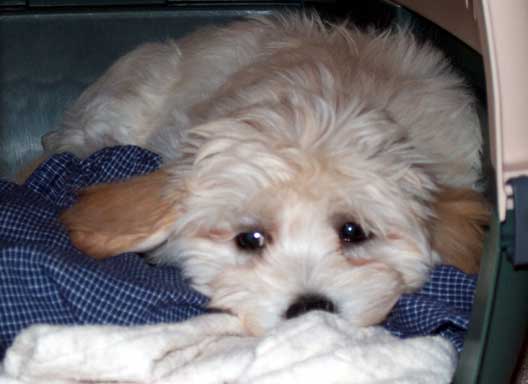 Sometime after Saturday Mojo's tail turned into the normal Havanese tail - one that curves upward over his behind. It was after Saturday because, well, we don't remember looking like that on Saturday. Maybe it happened Sunday night?

I wonder what happened. Maybe his tail really did grow an inch?

It's been a few days since the last update...

On Saturday 4/10 we went to Cannon Beach. Mojo had fun! He met all kinds of people, and ran up and down the beach. We got to try out our sherpa bag on him, and he was fine. He did barf a lot, though - four times that day. We're not sure if it was the feather and other stuff he might have eaten, or motion sickness from being in the bag, or maybe it was the sand that he tried to eat before he knew what it was.

It was a fun day, all in all. The trip was almost a havanese promotional tour, since so many people were asking about him (and petting him). It was Mojo heaven. His tail grew by an inch, it was wagging so much.

The last few days there wasn't much. We discovered that if Mojo doesn't run or exercise a lot he starts getting bitey and annoying. So this morning we ran him outside, and he got mellower and more attentive. So run your puppies every day!

We taught him to lie down consistently too. He also will occasionally roll over, and he'll stay every once in a while. Plus he's familiar and sometime obeys the hand signals for them. How about that?

The other thing we're training him how to do is walk. We had some cheese that was kind of melted (we left it in the car), so we figured we'd try it as a treat. It worked wonders! So Mojo can now stand up on his hind legs and walk for a short distance. He did it in class too, which was funny (not everyone saw it though).

He was getting more socialized in class too. At the start, he was shying away from Riley (the lhasa mix). By the end, both of them were barking and playing. We're hoping that next week both of them (Mojo & Riley) will remember this session and play from the start of the session.