We gave Mojo another dingo a bit ago. It actually was a dingo that we gave him a while ago (days?), and he went and hid it. Ela said she saw him try and bury it in one of our chairs, then near the bed, then somewhere else. It's funny, because he'd forget where he put it, then she'd ask him and he'd kind of wander around looking for it.

I found it in his blankets, and gave it to him. At first he was sort of surprised - "where'd that come from?" Then he rolled around with it a bit, then he went at it for real. He's had it for the last hour or so, and it's a sopping mess. it was only a few weeks ago that a dingo would last two, maybe three days. Now it only lasts for two or three hours.

We went by a pet store after the movie, just to see the puppies there. It was fun, but sad - they had two bichons there that were four or five months old. They looked so scraggly, and it's terrible - bichons are supposed to need company like havs, and these dogs were so old that they might never bond anymore. Sigh.

It's also kind of amazing that Mojo was that small. What were we thinking, bringing him to Cannon Beach? Oh well. We'll head over there again soon, and we'll see if he remembers.

Anyway, Ela realized that Mojo's biting actually has a purpose. When he bites us, he's not biting - he's grabbing our hand with his mouth for something. Sometimes he lifts the hand up to say "pet me." Sometimes it's "come here and get this for me." The latter just happened when I threw his booda onto a chair. He couldn't quite get it, so he barked at it bit, then grabbed my hand and dragged me over to the chair to get it for him. How about that?

The "find it" is working, but it's really funny. He isn't using his nose, because he knows a treat is out there and he's too excited. What he does instead is watch us watch him, then takes clues about where the treat is from where we're looking. What a lazy dog!

He also really, really loves slides. We went out there this afternoon, went down the slide a few times, and after a lot of running around (nobody was around, so we let the leash go) we went to the slide again! He climbs up the stairs (they're flat stairs, like a spiral staircase) then jumps right into the mouth of the slide! Sometimes he tries to climb back up (too slippery), most of the time he just goes around. So we're tracking down an agility set, because we've concluded he's going to be too big (and long) to be a show dog. That would have been much too much work, I think. But agility is fun! He mostly follows my finger when I hold it out, jumping from armchair to armchair...at least the two times we've tried. Wonder how he'll do with the posts?

One thing we never really thought about is farting. I've heard jokes about dog farts, but thought they were jokes. Well they're not.

Mojo tends to stay on my desk during the day (when I'm there, of course). Sometimes he looks out the window, sometimes he naps, or tries to bite my fingers.

Lately, he's been, well, flatulent. At first we couldn't really believe it. Now we have no choice but to believe it. He doesn't do it a lot, but with his bowels, even a little is kind of a lot. Especially since he's right on my desk. There's nothing like the pungent smell of dog flatulence to remind one of the joys of pet ownership. Yum! Maybe it's just a phase?

We were up in Seattle a few weeks ago, and bought a bag of dates at one of the Pike Place Markets stalls.

Well today we went golfing, and we left the dates in a bag on the end table next to our armchairs. When we got back, the date pits were all over the floor, and one happy Mojo was looking at us, as if to say "Hey, did you guys get any more dates?"

Doh! We forgot that he can jump up on the chairs now! Luckily he left the seeds/pits on the floor instead of eating them. We have no idea if dates are good for him or not, but they don't really agree with his stomach much; he's pooped 3 times in the last 3 hours, and all of the poops have this goldeny color. Hmmm.

We're starting to work on more advanced commands like 'heel.' His attention span might be too short fo that to work right now. We're also trying something new: one of us tells him to do something while the other holds the treat. If he does it, then he gets the treat. That way he'll obey no matter who's talking, and he won't quite know who's going to give him the treat.

Another thing is when we give him a treat we put it far away from him & say "find it." Then he goes and gets the treat. That's more fun, because we can hide it somewhere and he'll snuff around for it. Thanks, "Good Dog U."

Here's a picture of Mojo after being tucked in. Yep, it's ridiculous, but what can you do?

Note: after this shot, he went to the floor to sleep as normal.

We tried an experiment: we're feeding Mojo a bit of canned food every day. No particular reason, really, just to give him some variety. We got a can of dog food when we picked up the 18lb bag of "chicken soup for the puppy lover's soul," a premium dog food. I'm not sure what the brand of the wet food is, but it's got lots of lamb...and smells like cat food. There haven't been any negative effects of a little bit of wet food. Negative effects include vomiting and diarrhea/soft poo. He really likes it. One side-effect is he's more willing to do tricks and obey, because we again have a treat that he likes.

We now have, in our arsenal of treats:

* beef bones, from steaks and ribs. We throw them out the same day, though.
* lamb bone & some other bone from the pet store
* liver treats
* lamb sausage (yeah, it's still in the fridge)
* tripe (we picked up a bag when we got the 2lb bag of chicken soup)
* eukanuba biscuits (we still have these too)
* various cookies and dog food samples
* wet dog food
* random foods, like scrambled eggs
* this really bad beef jerky we got at Fred Meyer.
* hot dogs. I'm not sure what to do with these now, they're so old. There are two packs in the freezer still. Maybe we'll just grill 'em.
* dingos. But we ran out.
* pig ears.

Except for the tricks, we're getting away from using treats for a reward. We should use them more to reinforce what we trained him, but we've been kind of slacking on that. He doesn't stay (except at the top of the stair) really well anymore. He will "leave it" though.

We had to bathe Mojo again, because the beef ribs left oily residue all over his chest, paws, and chin. He looked like a poodle from another angle, but from this angle he looks like a wet Mojo. 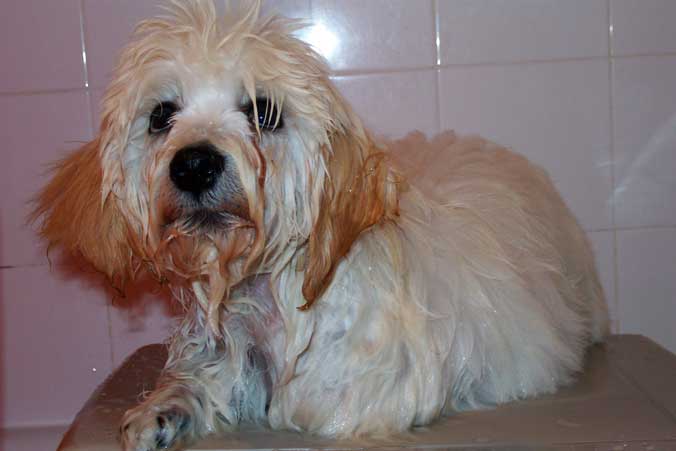