Ela cut Mojo's hair the other day, because he'd just get too matted up at daycare. She started out a bit shaky, but by the end Mojo looked like a whole new dog!

And that's in a good way!

Actually, he's just got a nice puppy cut now. All the coarser hair's been cut away, so he's really soft. His hair is much shorter (maybe 1.5-2 inches), so it doesn't mat as much. At least that's the theory.

The good thing about the short hair is he doesn't get as much stuff tangled in it when we go out for walks. There's still a lot of hair, but it's less shaggy.

Sleeping is Mojo's favorite hobby! That, and going outside. 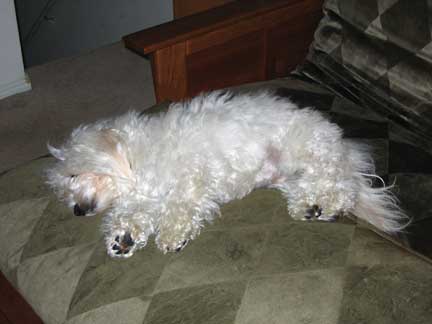 Well, Mojo's overnight stay at daycare went well. It was as much of a problem for us as it was for him. It was pretty strange, not having Mojo around, especially at night.

When we picked him up the next day, he was incredibly excited. We went off to the park, where we ran around a bit (as usual). And when we got home, Mojo was totally pooped.

I wonder what'll happen after 12 days of daycare?

We're going to bring his pet bed, so he has somewhere to stay. For this outing we only brought his crate with a blanket inside, which is less comfy.

Anyhow, Ela for some reason has gotten the grooming bug, and cut Mojo's hair last night. It actually looks pretty good, and his hair is now a lot more manageable than it used to be. It's also softer, because she cut all the rougher coat off. Right now he's in the bathroom getting bathed, and since it was a bath day he got a beef rib (or three)! We give him these during bath day because he gets kind of greasy, as you can see below: 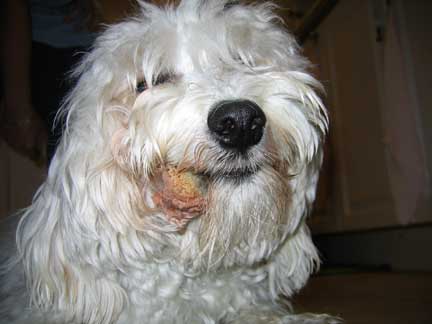 Somehow the rib got stuck to his face, leading to a very weird picture. That thing on the right side of Mojo's face is actually a beef short rib. It looks like some kind of growth, doesn't it?