Just an FYI, the format of the ads changed a bit. I'm trying to squeeze more money out of google's advertisers, so the ads are inlined now.

Also, I just discovered that this blog comes with an rss feed! How about that? If you're using Tiger, just click on the "RSS" button. If not, here's the RSS link: feed://www.veloso.org/puppy/atom.xml

# posted by mannyv @ 5/07/2005 11:28:00 PM
Today was the Columbia Agility Team fun run. Yep, we finally made it to another one of these! It was kind of a bummer, because we could only do two runs. There were too many dogs, not enough time, and an advanced run scheduled for noon.

The two runs were OK. I did one and Ela did one. It's amazing how much agility you can forget if you haven't done a run in a while.

I had the first run, and at first Mojo didn't want to jump the jumps. Doh! So we got past that, and he went up the A-frame just fine. But he didn't want to jump through the tire, and I think I cut him off anyway (whoops). Then he had to go into a dark, windy tunnel, and he really didn't want to. I backed up and went forward, hoping to entice him into entering the tunnel. He just sat there, looking at me expectantly. So I threw a piece of cheese into the tunnel, and off he went. He spent the next few seconds rooting around in the tunnel looking for the cheese...or at least I think he was. It had an s-curve, and I couldn't see into it at all.

Well he popped out eventually, and we hit the weave poles. We've been practicing them at home, but he still is kind of iffy. Well, he was kind of iffy. I tried going at the straight ones with no luck, so we just went through the offset poles. Cool!

Next was a jump, which he did, then the dog walk, which was fine. After he got off the walk he did the next jump, then went right up onto the see-saw. The good thing is he hit both contacts of the see-saw. The bad thing is he jumped off the end of the see-saw while it was still in midair, which elicited an "oooohhhh!" from the audience. I pulled him around to do it again, and he didn't want to go back on it. I coaxed him up, and he stopped right before halfway - which meant the seesaw wouldn't tip. With the promise of lots of cheese, he inched his way forward until the tipping started. I told him to wait, the seesaw hit the ground, and off we went to the table. The next were pretty straight-forward, a jump, turn, then two jumps.

Ela's run went better - I remember he jumped straight, went up the a-frame, then slowed down at the tire. The tunnel was trouble again, as was the see-saw. Everything else was fine.

Afterwards, Mojo was really dirty. It's a barn, with dust, and he'd been playing with another dog (marley, from daycare). So he was basically a dust mop. A wash was in order, so he got washed.

Even after washing he's got a strange stripe on his back. Hmm, wonder if that'll be permanent? 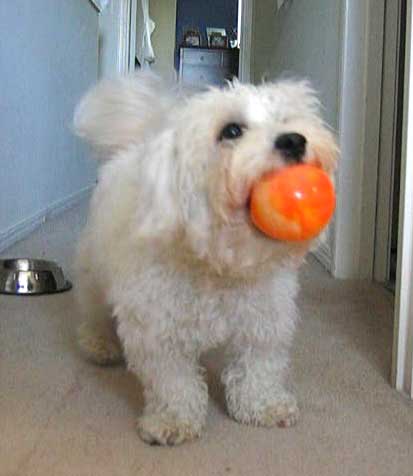 Mine! Mine! All mine! 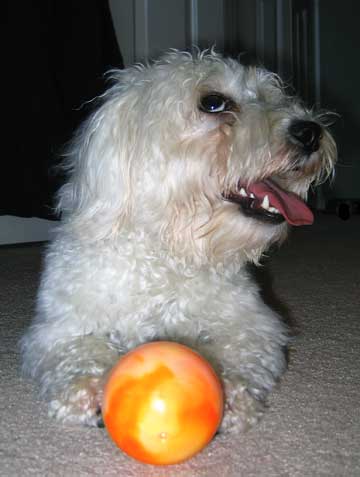 A good view of the new haircut. 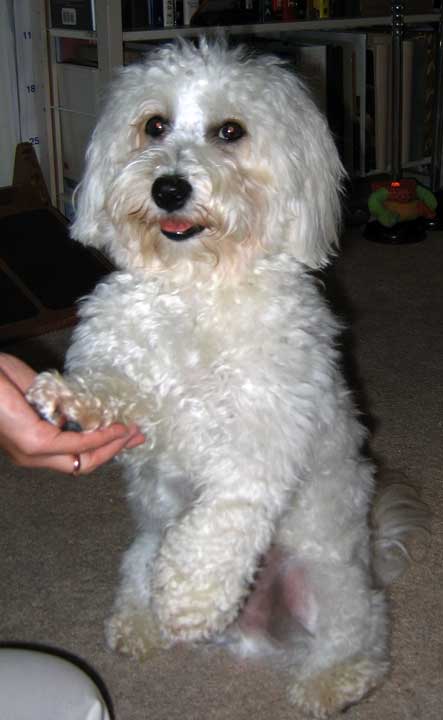 A view of the other side. 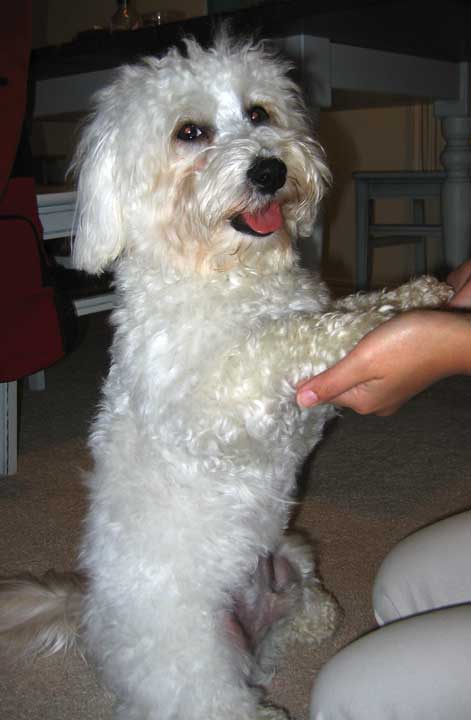 Reclining, after a long photo shoot. 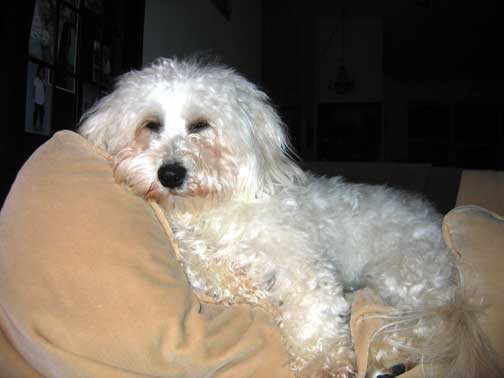 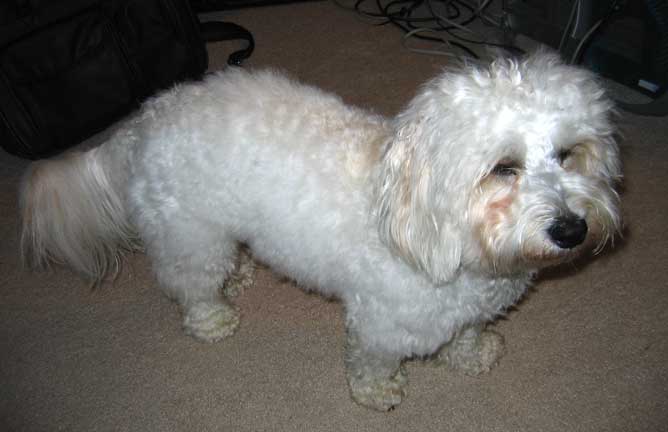 Mojo got a haircut yesterday! We could have made another dog from all the cut hair. Using clippers, scissors, and some kind of weird hair tool, Ela carved a new dog out of Mojo's hair.

We did it at AquaDog because they had electric clippers. Something we didn't think about was all the hair...it was everywhere. By doing it at AquaDog, we didn't have to deal with a ridiculous amount of hair. It was everywhere - our clothes, the grooming table, the floor, and on Mojo. No cleanup for us! And it was only $5! Thank you, AquaDog!

We don't have a good after picture yet, but the new hairdo looks pretty OK.

Mojo under the knife! 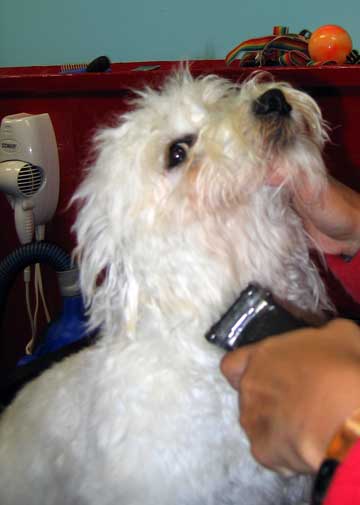 We got Mojo a new toy at Petsmart: a vinyl ball. We call it the gumball, and he really loves it. I think it's because he can sort of chew on it after he fetches it.

The funny thing about it is that he can't carry it for very long, because his saliva makes it too slippery to hold. So he runs, then it falls out and he goes running around trying to get it in his mouth again. He looks like a cat playing with a mouse!

Mojo and the gumball! 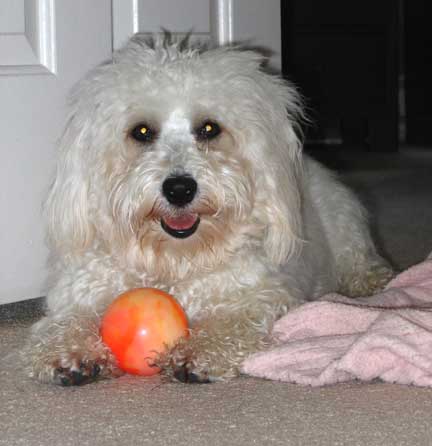 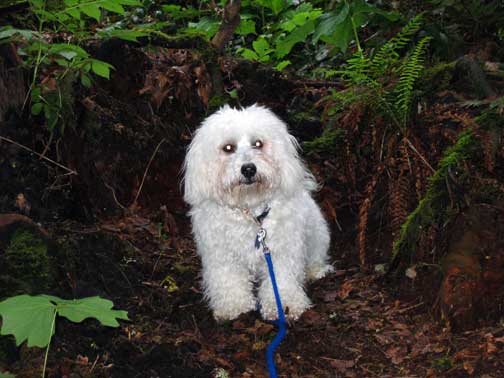 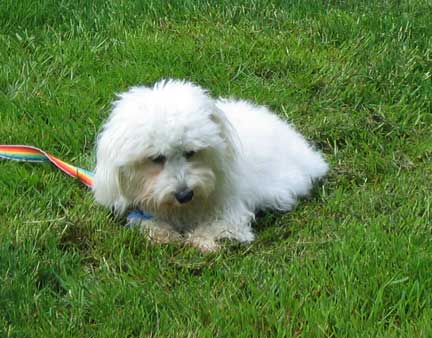 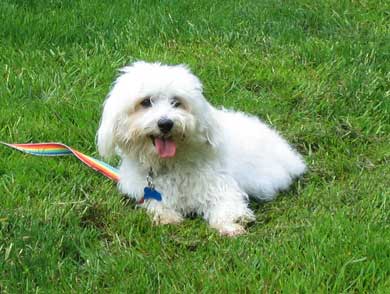 Mojo was walking upstream in this shot. He hopped right in and started moving, which was a surprise. 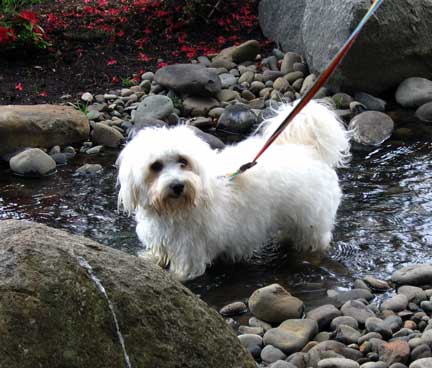