Two funny stories about mojo from this morning!

Ela went to the gym/fitness room this morning, and took Mojo. She was doing her thing, and Mojo went off to explore. The room has equipment on one section, then there's a separate area for aerobics classes. It's got mirrors on three sides, hardwood floors, and the other side opens up to the exercise equipment.

Mojo went over there, then apparently caught sight of himself in the mirrors. Then he took off and ran into the mirror. He then started playing with the dog in the mirror (ie: Mojo) for what sounded like a really long time. He'd bark, then bow, then he'd stand up and run into the mirror, then run around & bark. Ela couldn't tell if he knew it was him or not. Things got really exciting when he got to a corner, because then there were two other dogs!

It sounds like he played with his reflections for half an hour? forty minutes? That's what happens when you leave your dog unsupervised.

The other story is what happened when they got back. Mojo worked up a sweat in the gym, and on the way back was panting (as usual). When they got home, they went upstairs, and Ela was doing morning things when she heard this weird sound. She looked around, and it was coming from the other bathroom. She went in, and Mojo was in the bathtub pawing at the bathtub spout, trying to get water to come out! She wetted him down before they went out, and he was so hot he wanted more! Unbelievable!

Boy, it's hot. It's so hot that Mojo wanted to run back inside and sit on the cold tiles. It's about 101 degrees here, maybe 20-30 degrees hotter than normal. Lucky for Mojo we cut his hair a few weeks ago. If not, he'd be able to go maybe 5 feet before collapsing.

Oh, another thing. When we do a "find it", Mojo now goes and looks in each spot that he saw us.

With "find it," Mojo sits and we'd take a treat and put it somewhere. He'd watch us, and usually he'd go to the last place and see if the treat was there. If not, he'd hunt around.

Now, he goes to each spot that we went to and check it out to see if the treat's there. Only after he doesn't find it will he go into "search mode." And in search mode he uses his nose, which is great. I still am not sure how he knows what he's supposed to be looking for. I guess if it's food, he's found it.

It looks like he remembers most of the places, maybe 5 or 6?

I should try and see if he'll do a "find it" with something else besides food. Right now if we go "where's ???" or "get ???" he'll usually go hunt down whatever that thing is. Maybe "find it" would get him to be a tracking dog, like he'd find it by scent?

I just remembered a lot of stuff that I need to write down...

But first, agility. The other day was another lesson, and it was really fun. They lined up obstacles in a row, and the dogs had to go across all of them to the end.

At first they had the tunnel, four jumps, and the table. We'd bring the dogs to the first jump, then let them to and say "table" and they'd do the jump then hop onto the table for a treat (there was someone behind the table with the treats). This was leash-off, so that whole path was fenced off a bit...not that it mattered.

Then you'd take your dog to the second jump, then the third, etc. What was great was you'd tell your dog to sit, then unclip the leash, then stay, then you could see how long your dog would stay before either you told it to go (ideal) or it just went (whoops). Mojo was pretty good about staying, but he also took off a few times. Doh!

After that they added the weave poles and the seesaw. Mojo did better on the poles, and really loves the seesaw. He ran right up to it, then hopped off the other end. They put the table under the seesaw so it wouldn't fully tilt over; they'll take that off next week.

Overall, agility is fun! He does get distracted by the audience, but what can you do? Hopefully I'll figure out more of the handller agility mind-set (I'll get a book or something).

The other stuff. Mojo learned how to jump up onto our bed a while ago, which was both a source of pride and horror. It's great he finally was able to do it, but now he can jump up anytime...like at 5am...and start chomping on my ears.

Before this, he just was able to jump up enough so he could see us. He'd hop like a, well, pogo stick or something like that. He could put his feet up and sort of see us, and he could see us when he'd jump up and down, but he never quite was able to scramble up.

Instead, he'd just bark and whine at us in the morning. He'd do this so we'd pet him, not so we'd go outside with him or feed him. At 5:30am he'd be yapping away trying to wake us up. We did, and we'd pet him sleepily, which was bad - it taught him that it was OK to do it and it worked.

Now that he's learned to jump up, he doesn't bark anymore. He just hops up and chows on my ear directly. Oy!

The last thing is something Ela found last night: an underwear stash! Mojo's been stealing our underwear and padding his bedding. How weird. He only had a few pairs, but still. He always tries to snag Ela's undies out of the laundry basket, but we had no idea he had a collection. How about that?

Tonight Mojo lost what may be his last baby tooth! Here's a shot of our collection. We got all four fangs, and maybe both sets of premolars? 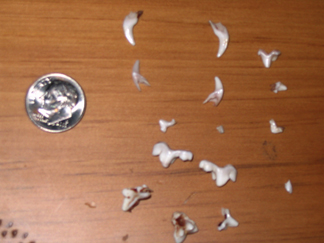 Mojo's 12.2 lbs today. It sounds like he's slowing down on the growth curve, maybe he'll be 15 lbs total?

Oh, one strange note: yesterday at the falls there was a woman who insisted that Mojo was a maltese-lhasa mix, just like her dear departed maltese-lhasa. Nothing we could say would dissuade her from her belief, especially given Mojo's apricot-tinted ears (which apparently is just like a lhasa's show ears).

Oh, I forgot to write about the agility class on wed. It was fine, except for the damn weave poles. Those poles are going to be a problem, because even I think they're pointless. If I think that, how am I going to convince Mojo to go through them quickly?

Anyway, some details: they raised the seesaw to its full height, but put the table underneath it so it wouldn't slam to the floor when the dogs crossed the middle. It was a good idea, because a couple of dogs were pretty freaked out by the tipping action. Mojo didn't notice; he and a bunch of the other dog sniffed/tracked their way across the seesaw without noticing anything else.

The poles were, well, poles. The first and second time he hopped across each pole crossing. The third time I had to drag him between the poles with a leash/treat. Doh!

Then there was a really big a-frame thing (we call it the plank). The dog goes up this ramp to a platform around 4 feet high, then walks across the platform, then down another ramp.

The weave poles were the only problem. Mojo did the plank really well, since it's just a bigger version of what he does with the local retaining walls. Everyhting else was no problem.

I guess we have to figure out a good way around the poles?

Mojo on my desk again. 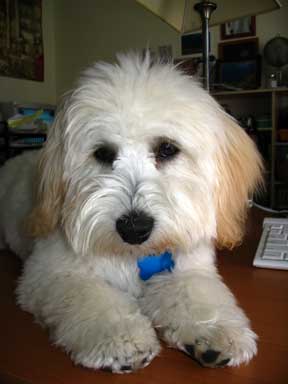 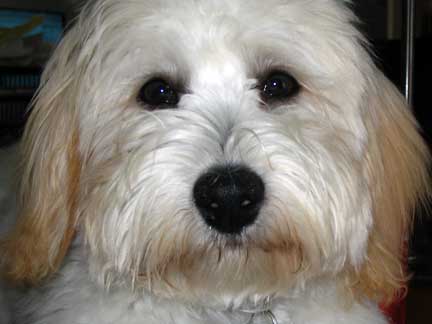 Help, I can't get down from this chair! 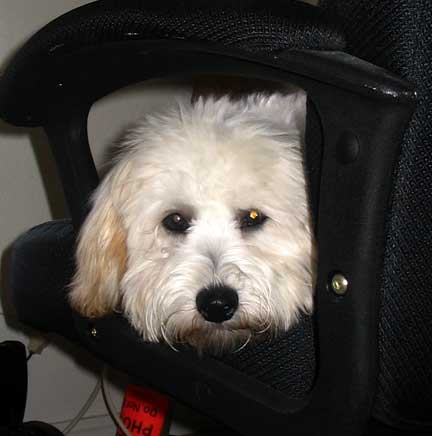 We went to multnomah falls today. This is Mojo after a dip in the river. 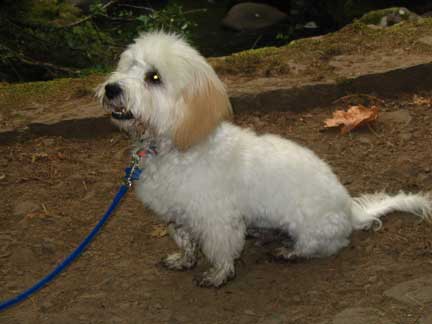 Looking out over the Columbia river (and I-84) 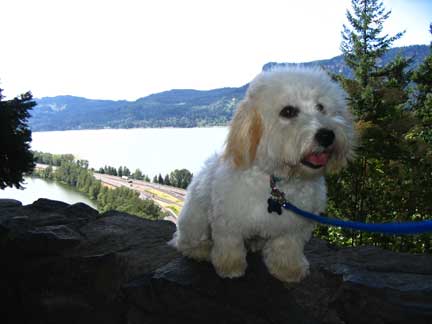 At the base of the trail, looking tired. 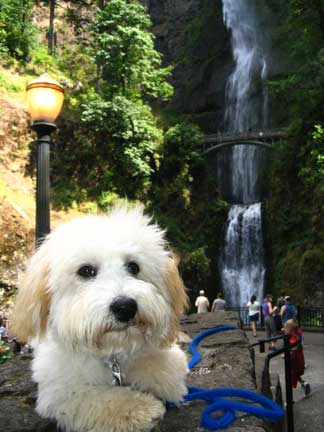