I was taking pictures of Plug's stuff in anticipation of a sale, and realized that Plug's old hamster ball would make a great Mojo toy.

Little did Mojo know how much fun you could have with a hamster ball...especially when you put a treat in it.

This picture was taken after I opened the ball, so Mojo could get to the treat. Yum! 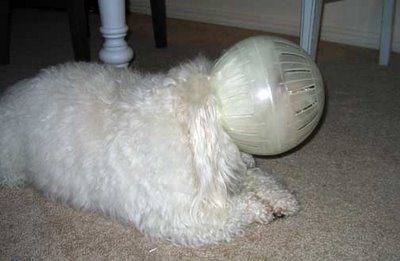 One morning I noticed that Mojo was more naggy than usual. He'd start whining, putting his feet up on the chair (and standing), etc.

I was thinking "why is he being so whiny?" Then Ela called and said that she told Mojo that he'd be heading to daycare. Mojo remembered, and was trying to get me to go NOW! Ha!

When we started driving, he sat on my left arm (as usual), and got all excited when we made the turn into the barkzone. Mmm, that dog is pretty smart.

The other day we got him a new squeak toy - the turkey. It's actually a latex chicken, but we figured using the same word for a treat and toy would be too confusing. It's his favorite now; he brings it with him everywhere, and can't stop squeaking it. In the store he was trying to extract it from its plastic bag. When he got home, he finally did! Somehow (and we're not sure how yet) he ripped a hole in the plastic bag and liberated the turkey. How about that?

According to Ela, he's actually been poking his head into bags and removing things. Weird.

It's been raining for weeks here in Portland. Mojo hasn't really been out for a walk in a long time. We take him to PetSmart, or drive around with him in the car, but it's not the same as getting out, sniffing, and peeing on all the bushes.

Well today I was practicing my putting, and Mojo made sure I knew he wanted to go out: 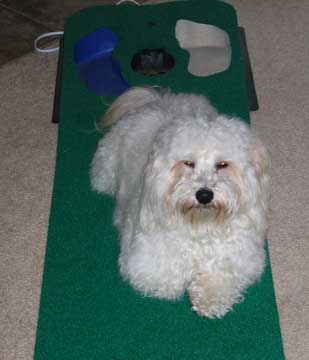 One day we had a bunch of laundry to do. Instead of piling it up like we usually do, we made a Mojo obstacle course! It wasn't much of a course, just two jumps, but we ran Mojo back and forth across the jump for a really long time. It was really fun!

Caught only for a moment - Mojo's extreme speed made catching him in action incredibly difficult! 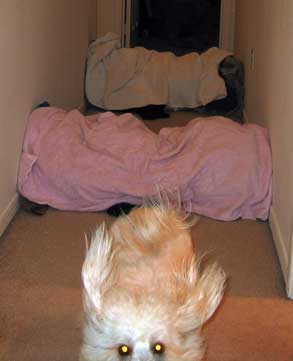 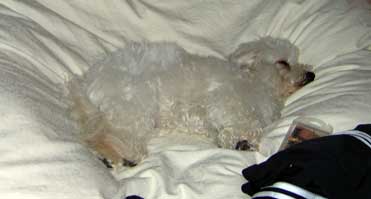