Mojo finally went to daycare yesterday. He was only there for a few hours, but he really wanted to go. When we got there, he practically flew towards the door of the daycare place. In the atrium, he was chomping at the bit, trying to get in.

He was only there for a few hours, but he definitely got his fill.

He also got a beef bone (we still have a bunch of them in the freezer) and a dingo. It's so funny when Mojo eats a beef bone. He can't help but growl if you touch him. You can touch him and he growls - then you move your finger away and he stops. He's got some kind of switch that he can't control!

The good thing is he drops the bone on command. It takes him a few seconds, but he does it. Whew!

After we took the bone away, we gave him a Dingo, which made his day even more!

Now he needs another bath and a haircut. Oh well, maybe next week.

I noticed I haven't posted any pictures of Mojo in a while, so here are some new ones!

Mojo saying hello to the camera. 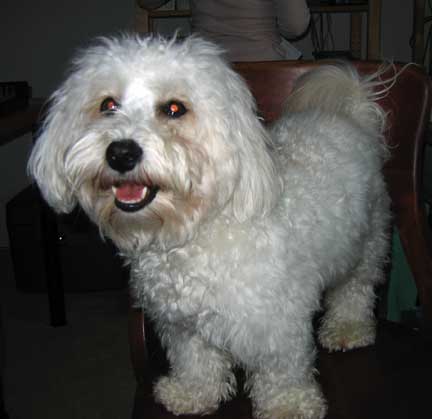 We do know that he keeps stashes of stuff in various locations. Ela found one of his stashes in a closet. There were bones (dry roasted, thank goodness), some socks, and part of a dingo in that one. Wonder where he stashed this thing? 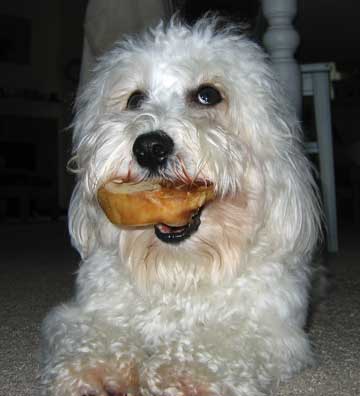 We went jogging with Mojo today. It's kind of sad that he can run longer than I can. I'm a lot bigger than he is, though.

One thing I noticed is that walking on pavement (or jogging on the sidewalk) really files down his nails. They're smooth and evenly worn from our jog.

Mojo's getting more and more off-leash practice. It's not really off-leash, since the leash is still attached to him...it's just there's nothing at the end of the leash. It really is more relaxing not to have to hold onto the leash all the time, and it's kind of neat to be able to control (vaguely) your dog at a short distance. If he's walking too fast you can say "wait" and he'll slow down. Cluck a few times and he'll stop, or at least look back at you. Any kind of noise, really, and he'll slow down and wait for you to catch up.

If he gets excited, well, that's another story. He's been pretty good so far, but there hasn't been anything in front of him that he's wanted to chase.

One good thing about our constant training (class without end?) is he'll stay for a really long time without being able to see either of us. We can walk away and he'll stay. Of course, there aren't any distractions around when he does this. If there were other people we're not sure what he'd do. Probably go say hi :)

Tomorrow's his last PetSmart class. Last time they didn't have any of those graduation hats handy; maybe we'll have some nice pictures of Mojo during his graduation!