This is a great picture of Mojo doing what he does best: sleeping. He's halfway under the bed because the light is on! 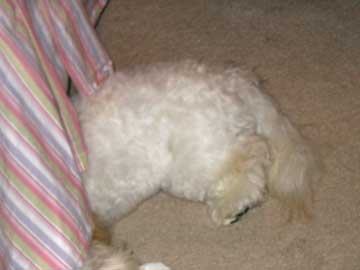 # posted by mannyv @ 9/29/2004 11:45:29 PM
I gave Mojo a bath today. It took an hour, and Mojo was really good! When I was shampooing him, I'd go for a leg and he'd lift it up for me. Same with the conditioner. He put up no resistance at all. Wow. I guess all those trips to the groomer and Ela's bathing made him realize that there wasn't anything he could do about it, but if he helped it would be done faster?

Drying him was a bit of a problem, since I had one hand for the brush and another for the hair dryer. That left no hands to hold the Mojo. But again, he made it easy...except for his hind legs and tail. He always was trying to turn around to see what I was doing. That made it hard to comb out the hair on his legs and tail, let me tell you.

I got a bunch of mats out of his muzzle. By that time he was pretty much asleep, or as asleep as he could be with someone tugging on his muzzle hair. After much de-matting, I was finally able to run our brush through his muzzle with no snags. Victory!

I bought a bag of these beef jerky like treats, but Mojo still likes the chicken strips best. You'd think beef would be #1, but surprisingly it isn't.

Begging at the table.

This is after daycare. He finally went, because by 9/28 he was pretty much symptom free. Symptom free in Mojo's case was no sneezing. I'm not a vet, so we'll see how many of the other dogs come down with something. He was so happy to get to daycare, and as you can see, he was totally pooped afterwards. 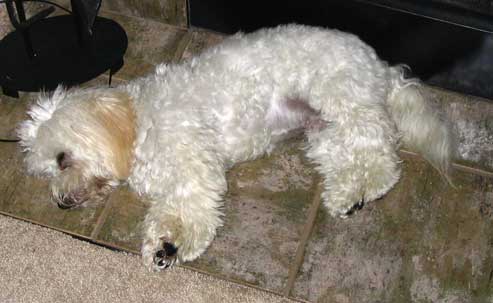 Here he is after today's bath. I don't have the fancy camera with me, so the focus is a bit off. It's still good enough to show how fluffy he got. And he seems to like it? 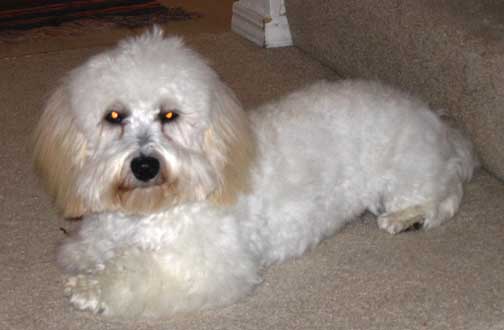 Whoa, 5 days without an entry! That's a new record!

Nothing really's been happening of note. Mojo's cold/sickness thing is winding down. He's taken more antibiotics than I have. The sneezing is less, and he's back to normal. Hope he'll be able to go to agility on Wed...and that there is an agility on Wed.

He's gotten a lot more curious when we walk. He'll go into the woods, wander around, and generally poke into everything. He also has developed a thing for chewing on wood. He'll grab a stick, carry it, then drop it. I let him bring one home a few days ago, and he chewed it into splinters. He seems to know he shouldn't eat wood splinters, which is good.

I also changed some of his training. Now instead of "speak," I use "bark." Before, he seems to have blended everything together, so when I said "speak" he'd roll over, or whine, or stand up. Now he just barks when I say "bark."

Probably the most frustrating thing about being sick for Mojo is that he can't play with dogs. When we see dogs coming, I warn the other owner that Mojo's got a cold/is sick, and they rapidly drag their dog away. Nobody wants a sick dog. So Mojo just kind of whines and tries to go towards the other dog. If he's better by Wed, maybe I'll drop him in daycare for a few hours then pick him up to go to agility.