Another amusing Mojo behavior that's coming out (emerging?) is his hunting instinct.

Yes, Mojo has a hunting instinct. It manifests itself by Mojo trying to chase every bird that he sees. If we're walking and he sees a robin on the ground, he'll stop...point...then lunge towards the robin with all his might, trying to drag us behind him.

Needless to say, he hasn't gotten a robin yet.

He does this with other birds. As long as the bird is on the ground, he'll go after it.

He goes for squirrels too, but they're too cagey for him. Squirrels also might be low enough to the ground that he can't see them. When he does see them, though, he goes after them.

# posted by mannyv @ 4/21/2005 08:39:00 PM
Mojo was at daycare for a few hours yesterday. He really loves it, and it probably was fun for him considering it's been a few weeks since he's played with other dogs. 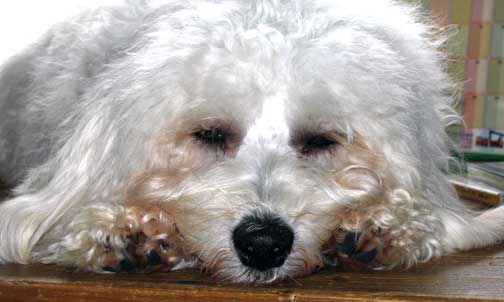 Mojo's barfing seemed to be due to his bunny toy. Maybe the fibers were, well, we're not really sure why.

Mojo seems to be fine, and in much better spirits now that he's not barfing a lot.

We picked up 6 plungers, and have started weave pole training. That's a lot more fun than obedience, in my opinion. The weave poles are the only problem obstacle, so maybe in a few weeks he'll be doing them for real. Right now the poles are in an "open" formation (with a path down the middle). We'll be shrinking the path every few days, and hopefully Mojo'll figure out what he's supposed to do then.

The dog show was fun! We got lots off food samples, but not a lot of treats or toys. There seemed to be fewer vendors this year, but a lot more dogs. Mojo was totally exhausted by the last aisle, and we were carrying him by the end. When we got home, he pretty much passed out. He had a lot more energy last year, I think.