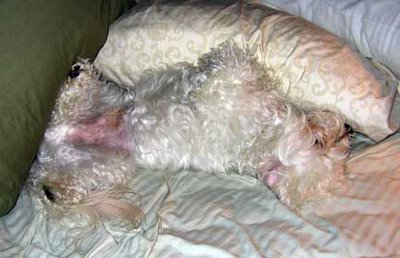 It's always nice to take a nap! 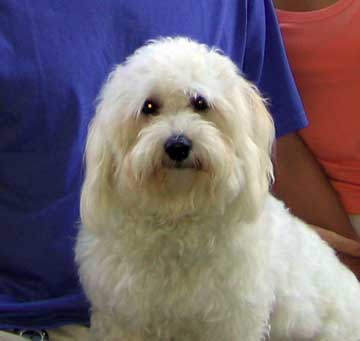 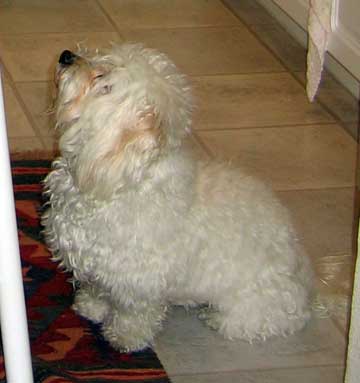 I'm not begging, I'm looking up at the food! 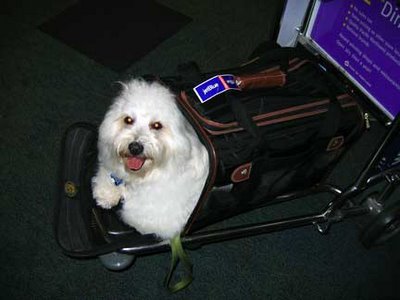 Mojo, world traveller, enjoying some time outside the Sherpa. 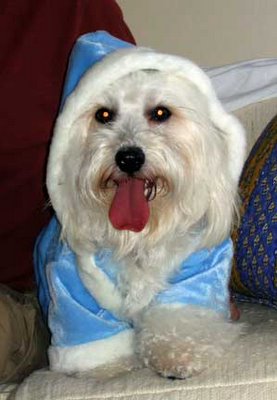 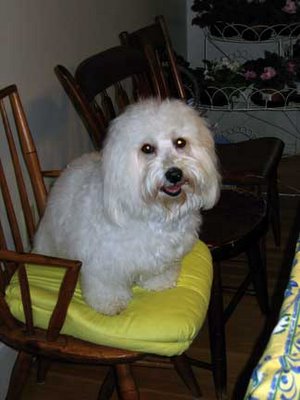 Mojo sitting patiently at the dinner table, waiting for some leftover Lamb or Steak.

So what's been up with Mojo? A lot! We brought him to NY for Christmas this year, and Mojo showed that he was a completely seasoned traveller. The JetBlue seats are kind of short so we had to squish the Sherpa a bit, but he slept through both flights - coming and going. On the return flight a Papillon a few rows ahead of us was barking all flight, something which Mojo ignored completely. Whew!

He really loves the holidays, or at least being at the house. It's bigger than here, and there are lots of people to play with. The first day we were running around chasing Mojo or being chased by him, and it was like being on a big hardwood playground. When the kids got there it was even more fun.

Mojo still seems to have problems pooping in other places, though. He really seems to like pooing on the carpets at the house, and we have no idea why. He knows he isn't supposed to, and looks sheepish when he's scolded about it. When Ela told him he shouldn't do it and potty on the pads he slunk under the bed for a bit. After a few minutes he was fine. He does seem to do this every time we go somewhere, at least for the first few days. Since we were only in NY for a few days we couldn't see if he'd start pooping on the pads.

One other thing that was sort of interesting was when the various kids started playing. They (the kids) would chase each other around, and Mojo would chase/follow along. During one of the chases someone was hitting someone else with something (not sure who or what it was), and Mojo started barking at them really loudly. Apparently he thought someone was being attacked, and was barking in an effort to stop it. Pretty interesting, and kinda weird.

Other than that, he had a great time. He got all kinds of food & treats, and even got presents! After his first present he started getting really interested in all the boxes, and was making sure that he sniffed -every- box to see if he had anything in it. When he did get a present, he'd carry it off to somewhere private so he could check it out, then carry it back to wait for the next box.

Before we left we brought him to the groomer, so he was all white and fluffy. We're also growing his hair out, so it's gotten kinda long. In the pictures (posted later) he looks like a big white puffball. By the end of the holiday he was looking more normal, which is less fancy but nicer.

I moved to a different shift a few months ago, so Mojo isn't home alone all day. We're not walking a lot yet due to the area rains. When the weather turns (next week?) we should be going out more.

Anyway, that's all for now. Pictures from the last few months'll be up soon!