Another weird thing about Mojo on the trip was that he pooped only four times.

Twice on a carpet. Yarrgh! One was on the first day, one was on the last day.
Once on a pad. Yay!
Once outside, when being walked.

Sure, he didn't eat. But he ate some food.

The strange thing is the carpet pooping. He knows better. Maybe he's doing a territory thing?

Mojo was so happy to get home that he ran up the stairs and ran around, making sure everything was still there. When we went upstairs, he jumped up on the bed and rolled around on it while making happy growling sounds. Wow, talk about being homesick!

He barks when he hears doorbells, even on TV. We've really got to train him to bark once, maybe twice, when he's doing a "someone's comiing" warning.

He seems to get tired more easily when he walks. Either that, or he looks up at us more. In the old days, he used to look up when he wanted to be carried. With the heeling stuff, he looks up a lot more, so maybe it's just that?

Pictures from our drive!

At the start of the trip. Time for a nap! 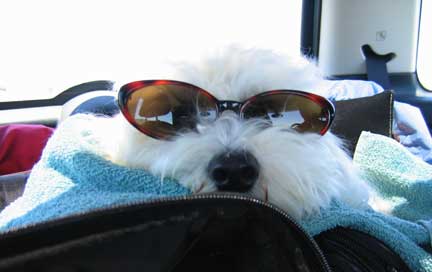 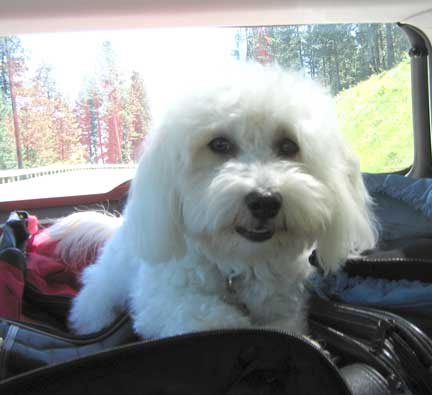 Hey, are we there yet? 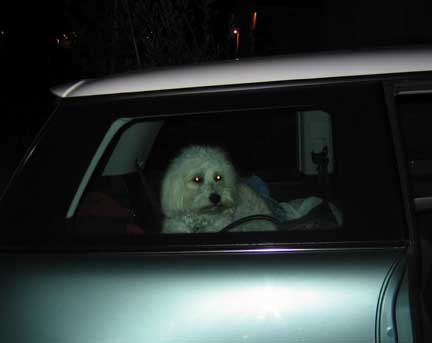 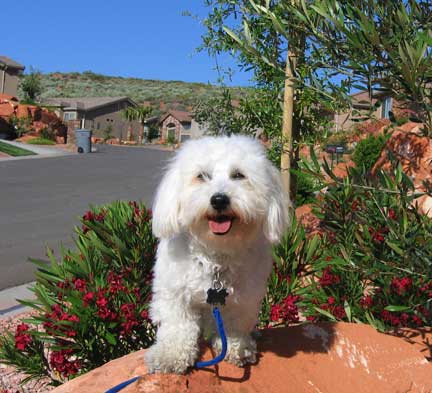 It's really, really hot! And bright! 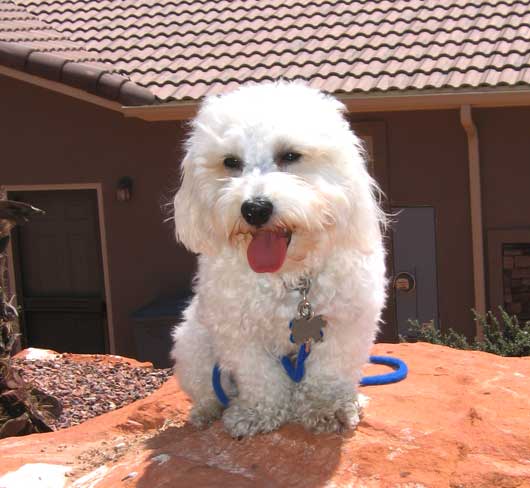 Mojo was pretty good during the drive, and caught up on his sleep. He slept on top of his sherpa, which acted like a hammock of sort.

During the trip, we noticed a couple of things. First, Mojo really doesn't eat during his first few days in a new place. That happened in Manila, and it happened here. He won't eat his normal food, but he'll eat treats and such. Maybe he's trying to figure out the area, and doesn't want to eat? Maybe he's waiting for some random animal to come by and eat his food, so he can see if his food's been poisoned? Maybe he's waiting for treats?

Who knows. He basically didn't eat for 2 days.

Second, he's getting to be a watchdog. If something happens that's "unexpected," he'll start howling and barking. Why? Who knows? We were out on the porch one morning, and someone came into the dining room (next to the porch). There went Mojo, howling away. And it was someone he knew!

On the way home, we stopped to get gas. The attendent came out, and Mojo went off like a siren. Arrgh! Having a dog suddenly howl in your ear at 11:30 PM is incredibly annoying, especially after 11 hours of driving.

Third, he really learns fast. One of the titas (aunts) taught him a new trick with his new toy. It really didn't take long for him to figure out when she was saying.

Anyway, Mojo was a hit, as usual. He seemed a bit more put out because Ela & I weren't there all the time, but he definitely enjoyed the company.

Wait until this weekend, when he's got the whole family to play with in Atlantic City. His howling makes us kind of nervous, since the facility is a "no pets" facility. In SC he didn't howl, so it wasn't an issue.