The dog show inspired Ela to do more obedience work. So yesterday, we started to figure out how long Mojo would stay. We said stay, then started walking away. If one of us stays with him, he'll stay for a really long distance/time: around 300 feet. If both of us go, the limit was about 40 feet.

We saw a Havanese in the agility competition. That was really neat! After watching a bunch of the novice agility runs, we figured that it'd be easy for us to compete at the novice level. If it weren't for those dumb poles, we'd be all set. We got some more treats and dog food for Mojo. So far, he's really liked the lamb lung treat (Solid Gold) and these biscuits we got from somewhere. Canine Caviar has been a big zero; he won't eat it, even as a treat. There was a duck-based dog food from somewhere that we picked up. He liked it, but not as much as Chicken Soup or Nature's Recipie.

One great thing about Mojo being older is that changes to his dog food don't result in diarrhea anymore. Whoo! So we can experiment like crazy.

He still loves his green tripe. The stuff in the can smells worse as time goes on. Hard to believe, but it does get worse.

He got a bath yesterday, and is mat-free again. I'm not sure what's up with his coat. It should be an all-adult coat, but it doesn't seem like it. It's different than the other Hav coats I've felt, in that some parts his hair is rough and some it's smooth. For example, the hair on his flanks is smooth and fine, whereas the big stripe of fur down his back is pretty rough. He's supposed to dump that rough coat (blowing coat) sometime around now, according to other Hav websites.

Hmm. He went to daycare monday, and was so excited to go that he practically dragged Ela into barkzone. When he was inside, all he wanted to do was go through the door to the play area. Then he spent the next 11 hours running around (thus the bath). Then when we were walking with him in the park, he wandered off to check something out, leading Ela to lament that he was getting more independent as he got older. Sigh, well, what can you do? 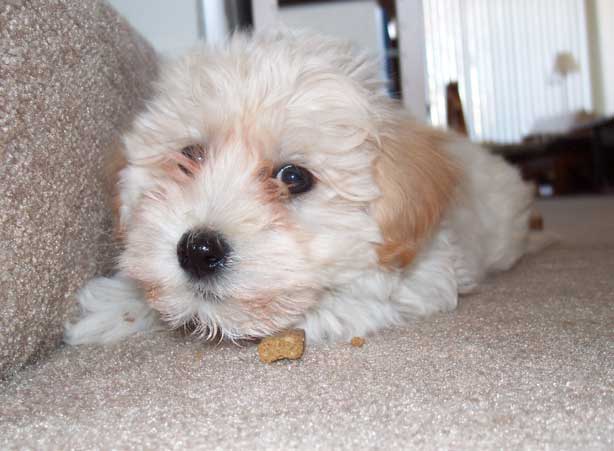