Naptime again. The guy sleeps like crazy. We also found out from the Eukanuba website that he should be eating 1.2 cups of food a day(!). We've been giving him 1/2 a cup a day, but he's run out of food for the last 2 days (2 or 3 days?). Time to feed him more.

We've also officially switched his treats to the lamb sausage stuff. It's just as much as a pack of hot dogs, but he likes it better (if you can believe it). They do dry out really quickly, so don't cut the whole thing up into pieces.

We also tried the "Old Mother Hubbard" bac'n'cheez biscuits, but Mojo refuses to eat them. He actually refuses to have anything to do with them. He won't even play with them - they're not even good enough to be toys. It's back to Petsmart for these guys.

Today is also "heartworm dose" day. The vet gave us two things to feed him: a syringe full of something, and a pill. Mojo slurped the syringe contents right up, and ate the pill like it was a treat. I was wondering how to get him to eat the pill. Some books say pop it into the back of his throat, but hey, what if it goes down his windpipe? Not to worry.

Mojo just discovered the plastic file box under my desk. He was trying to dig into the side for around 10 minutes, then retired to his den, pooped. Very strange.

One funny thing that I forgot to mention is Mojo's prepare-for-sleep habits. He likes lots of head support, so he'll pull and dig at his bedding (a towel) to get it into shape, then droop his head over it. He does the same thing with the blanket on our armchair. It's bizarre, and kind of amusing, that it takes him that long to get comfy. That's why he likes the booda so much: it fits right under his head.

Wow, Mojo's a different dog today. He hit 9 weeks, and he's back to his old self. His old self, of course, was not trying to take over the household. We tried the "walk the dog with a loose leash," and he seems to have gotten the point. Plus, he went in the litter every time and climbed the stairs twice (well, three times).

I'm not sure what this means, really. Was it just the end of the fear period? Was it just some weird thing? Or is that stage something that's latent, waiting to pop out if the opportunity arises?

Another good day/bad day. The good day lasted until around 9pm or so. Mojo was great, we left him alone, and though he was barking when we came home he was OK.

Yep, dog trainers know what happened - Mojo was trying to take over as the alpha dog. We had been lulled by Mojo's compliance and were cutting him too much slack. We also were cleaning up his pee in his sight, which is supposed to be a no-no (Ela doesn't believe this whole theory, but I think it fits). Basically, Mojo was acting like the top dog - peeing where he wanted to, doing what he wanted to.

I told him to drop his rawhide bone, and he refused. When I took it away (by prying his lips open) he growled. Whoa. He went off towards the kitchen, and squatted down to pee, and we stopped him in time by yelling his name. Yeah, I know it's bad, but at that point he was just annoying. That stopped him, and I carried him over to the litterbox/pads.

Then he got put through the "learn to earn" program, which is what we did as a puppy. No freedom, no toys, and everything he gets he gets after we make him sit or otherwise bend to our will. I gathered up all his toys, and put him through a training excercise - sit, stay, come here, give him a toy, tell him to drop it, etc.

He got worse when he needed to go to the bathroom again. He went upstairs, and refused to pee or poo on the pad. It was like he was a baby again - he'd hop out, we'd put him in, he'd hop out, etc. Eventually he peed, then he poo'd, with lots of growling and trying to escape. Then he went to bed (we put him in his crate).

The lesson? That the alpha dog stuff isn't bullshit in the dog world. It's unbelievable that our now 8-week old (4/1) puppy was trying to run us. Those behaviors in the books are real. I felt like someone on "good dog u" asking Jay (or whatever his name is) for help - "our puppy freaked out on us, what's the deal?"

I'll ask the trainer more about it on tuesday, or at least what we should do if it happens again. But for now, it's back to strict supervision. Sigh.

This effect was done by attaching a long cardboard tube onto the camera barrel. Kind of a neat effect. 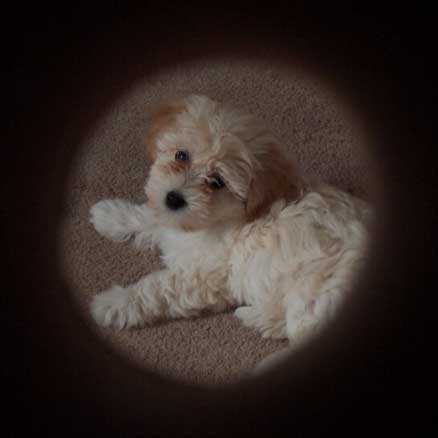 Another day without posting! Whoo!

Yesterday we brought Mojo to the fitness center again. He had fun - we made a tunnel out of the aerobic steps, and got him to run through them. He hopped up on a pyramid of them, but didn't really know how to get down (so we carried him). Mirrors were sort of interesting, but not as interesting as the hardwood floor.

He also hopped onto the treadmill with Ela for a while, but he kept moving back and forth, tangling the leash with Ela's feet.

After that, he was a bit rowdy...all day. He didn't really listen to us much, and was just a rambunctious puppy.

I went to the introductory puppy class and learned that Mojo (and most dogs) are ahead of the curve. You -can- play tug with him as long as you get him to drop the toy (yay!). The class was pretty fun. The other two puppies are a great dane (20lbs, 10 weeks) and a lhasa/shiatsu mix (4 months). Next week we bring the dogs to class, which'll be a trip.

The trainer also recommended this lamb sausage thing, so I picked one up. This morning (3/31) I tried it, and wow - it was like crack! Mojo paid attention immediately, and was sitting, staying, etc. Thumbs up on that stuff!

The trainer confirmed that a 'yip' was a good way to keep him from biting hard. There were a lot of good tips, and the little booklet they gave us was a good summary of what the dog books have been saying.

Funny, I just looked at the pictures I posted the other day, and in the last one Mojo reminds me of Macauley Culkin. Weird.

Another classic pose and look: 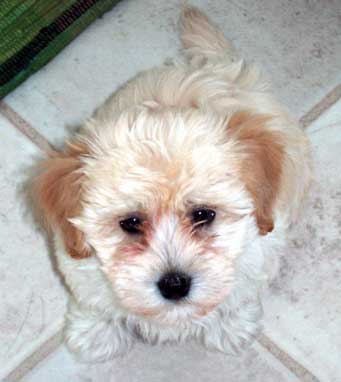 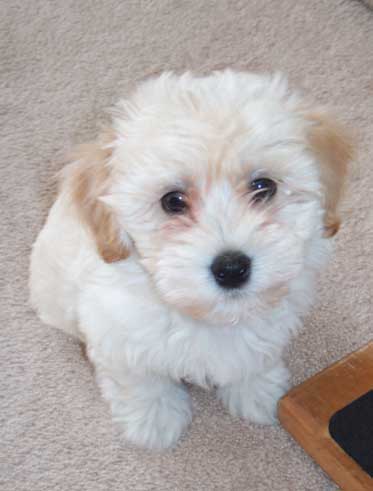 A day without blogging about Mojo is a good day!

Really, though, yesterday was pretty relaxed, and stressful at the same time. We left Mojo @home, and he did fine as far as we can tell. A nice long walk turned a bit stressful due to a barking pomeranian a block over. Mojo ran across the grass like, well, a small white dog. He likes running; there's obviously only so far he can go in the apartment, and out on the Kaiser Permanente lawn he could really stretch out his legs (they have a facility nearby with a nicely trimmed lawn).

We decided to switch from litter to the puppy pads. Puppy pads are basically flat diapers that you lay on the floor for your dog to pee on. They're about the same cost as litter, and you can bring them places. The transition was a bit awkward - Mojo was seriously looking for the litter box, even though the litter box was right there with a pad in it. But eventually he poo'd on the pad, with a ridiculous amount of coaching by Ela. Strangely enough he peed on the pad with no prompting.

He was pretty nervous overall. Before our chariots of fire moment, we went with him to Petsmart and he was pretty whiny. Our best guess was he was sleepy, since when we got home he hopped into his crate and went to sleep. Yep, it's always easier to figure this stuff out after the fact. When he's whining, it's like "hmmm, why is he whining?"

We might have figured out why he goes a bit crazy at 8-8:45pm - teething? It explains why he goes around biting everything (and everyone). We gave him a rawhide bone and he chewed away happily. Without it, he was bugging and biting us and being aggressive. Apparently what he was trying to tell us is "my gums really hurt," which in dog language means "I'm going to run around, bite you, and try and pull the clothes off your body."

If that's the case, we've done the Eukanuba biscuits wrong. Luckily I haven't had time to call, so we'll do a biscuit experiment this afternoon.