One of the agility things is an a-frame. Basically the dog goes up one side of the 'A' and down the other. The bottom part of the frame is painted, and the dog must touch it. This is to prevent injuries, from dogs taking flying leaps off the top.

Well, to do that well you have to get your dog to touch the bottom. Thus a new command: "target." What happens is you point to somewhere (or something) and your dog either touches it with his paw (for big dogs) or his nose (for small dogs). Small dogs can do the paw thing to.

Mojo's getting the hang of it. Most of the time he uses his nose, every once in a while he'll smack the target with his paw.

The target they used in class was a tupperware top. It's circular, plastic, easy to chew, and you can hide a treat under it. So you put the treat under the top, then say "target" and point, and when your dog does the right thing he gets the treat.

Ela's modified this somewhat - the treat isn't under the thing, you give it after. That way anything we point at can be a target.

We also worked on getting him to lie down while running. So he's running towards you, and you say "lie down" and he stops and lies down. It works, mostly. It doesn't take Mojo long to figure out what to do, if you're clear enough. He does have problems when he just wakes up, though. You can see his brain turning over, trying to figure out what you're saying.

This AM Ela brought him out, and when she woke him up & said "outside" he looked at her for a few seconds, as if to say "Huh? What are you saying?" Then he figured it out and bounded downstairs.

For some reason he's been pooping inside today. It's like his schedule is a bit off for some reason. Sometime in the AM (4? 5?) he pooped, and not on a pad :( Then later he pooped on a pad. He's been peeing on the pads all day too.

Hmmm. At least he hasn't forgotten how.

He's actually been out three times today: 8, 2, and 9. All three had successful visitations from the poop fairy. He had an unsuccessful journey at 7:30am, which doesn't count.

He only barfed after the 2 and 9pm trips. Maybe they put some fertilizer on the grass? Who knows. The first barf was really huge, the last wasn't so much.

Maybe he picked up something? We'll see over the next few days.

Mojo's big teeth are mostly in. He's only got four teeth on top (instead of his 6 baby teeth) and the same on the bottom (these are teeth between the incisors/canines). Wonder if the other two will come in? How many are supposed to be there anyway?

The poop campaign is ongoing. Three trips to the outdoors today: 8am, around 6pm, and around 10:30pm. All resulted in poops. Yay! One problem now is we're running out of plastic bags (our newspaper comes in them). I'll have to start using the doggie bags thoughtfully provided by the Hillsboro parks department. Thanks guys!

Agility went pretty well. Mojo ran right across the ladder-thing, went up & down the a-frame, and went through the tunnel. He also was able to sit/stay and down/stay for a surprisingly long time, and did it while nothing really was happening (except for the instructor talking). Amazing. He did want to play with the other dogs, but kept it under control (mostly).

He said "Hi" to one of the other dogs, and got overrun by Abby (sp?) the chocolate lab when coming out of the tunnel. That shook him up a bit, but he came out OK. Gotta figure out what he's supposed to do when big dogs steamroller him, I guess.

We've got homework again, so it's back-to-training for Mojo.

For no particular reason, I'm starting to get Mojo to poo outside instead of on the pads. It seems to be working fine. I'm not sure if he likes it better or not, but he sure does like going outside. Walks are at around 8am and maybe 6pm. Last night we had another at around 10, with a poop. How about that?

I suppose it'll cut down on pad usage. He doesn't really seem to have a preference for pads or the great outdoors, but it's nice to have the indoor option when it's raining.

I've actually been considering sodding our deck (our townhouse has a small concrete deck), but decided that was kind of silly.

Mojo keeps losing his baby teeth. We saw a loose one yesterday afternoon, but couldn't pull it out (he wouldn't hold stilll). Later that day it was gone. He also is getting more hair in his eyes. Not sure if that's due to the new haircut or what.

Caught Mojo napping this afternoon. He's got bed-head a bit! 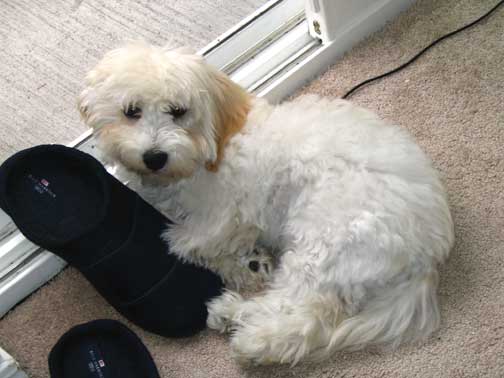 If you've ever been curious to see what a dog looks like when pooping, here he is. Notice the advanced leg-positioning. 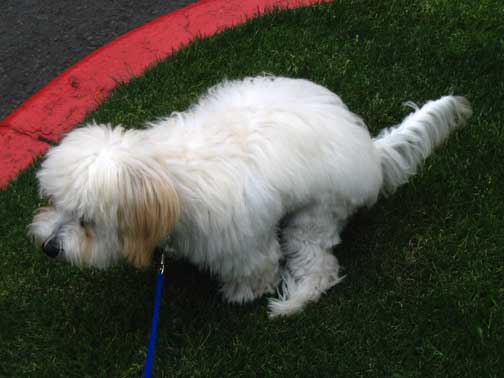 Mojo has a new trick!

He's known how to do this for a while, actually, but I just remembered to write about it.

All Havs (I think?) can and do stand up on their hind legs a lot. It's really cute. We used to try and get him to do it when we said "walk", but that didn't work so well. So now he does it when we say "hands up!" Then, we mix it with the "bang bang," and he falls and rolls over. Fun!

Years ago I got gel inserts for some shoes of mine. Mojo dug one of them out of the shoe and it's become his favorite toy. Yeech.

We went out to Orchard Park tonight, so Mojo could run around. At dusk it's great, as everything cooled off & there was a nice breeze from the west.

Funny, he jumped right into the car, both at home and at the park. Plus, he followed me up onto one of the picnic tables, though he almost slid off after the first jump (onto the seat).

Then he got his two scoops of wet food goodness when we got home. Yum!

Oh, Mojo's new teeth are coming in, and boy are they sharp. He's biting us more than before, which is annoying. Luckily the yips and saying "no bite" seem to work...for a while. His jaw power is strong enough to mangle a pen in a few minutes, so I don't feel so bad about his biting. It is something that we hope'll stop when all his teeth finally stabilize.

Also, we're signing up for an agility class. You have to be over a year to compete, but you can always sign up for training. The first class is Wed, which hopefully will be fun.

Just weighted Mojo, and he's exactly 10 lbs. He's gaining weight a bit faster, gaining 7 oz in 4 days. Maybe all those treats at the farmers' market were a bad idea. It might also be the new wet food, solid gold. Saw a can at New Seasons and figured why not? We give him a small bowl of it every night or so, maybe 3-4 oz. He really seems to love it.

His new haircut looks odd, but it's really nice, especially in this 90+ weather we've been having. It's also nice and fuzzy, which is great when you're petting him.

That's about it for today. Besides, it's hot!