* he's getting some more cream hilights in places. Down his back, his haunches, and the end of his tail are starting to go cream.

It's strange that his hair's changing color a bit, because his adult coat isn't due for another 4 months or so. His ears are turning more & more red, too, but only at the ends.

We were looking back at our pictures (we've got a lot more than we bothered to post) and wow was he small.

We were talking about dog food a bit while we watched him eat. There's a new trend in dog food (or maybe it's old, but I just read about it): raw dog food. The theory is that today's dog diets are far removed from what the ur-dogs ate back in the old days, and they in some way are optimized to eat those old diets, In short, since dogs couldn't make fire, all their food back in the day would have been raw, so dogs today should eat raw food.

Well, there are some problems with that. I'd think that most dogs over the last few thousand years have been fed mainly table scraps. I can't really see packs of wild Havanese, Maltese, Terriers, etc running around the countryside in a feral state terrorizing the local animals. Mojo goes at the bone and rips off all the meat/skin/etc, but I doubt a pack of Havs would be able to take down a cow...or a sheep, even.

Oh well, here are the pix of Mojo eating his new toy :)

The first bone. His puffiness from earlier has faded, and he's gotten all oily, enough that the camera has no problems focusing in on him anymore. 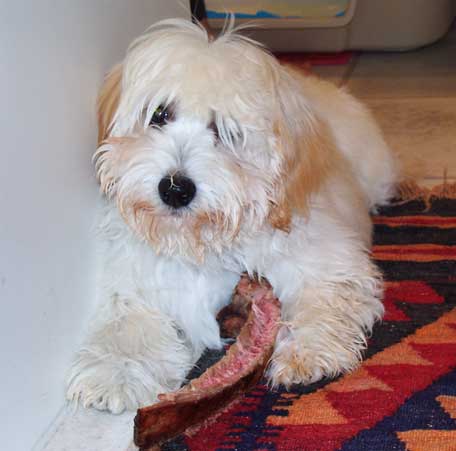 Look at that technique: he's holding the end down with his left paw so it'll be stable while he's gnawing on the other end. Pretty good, huh?

A side shot of the now-fluffy Mojo 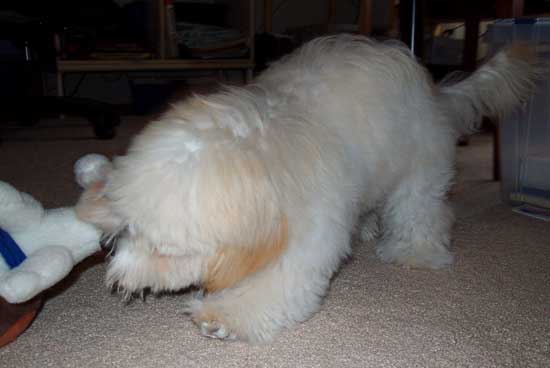 A bath really does make a difference! The camera can't focus on him anymore... 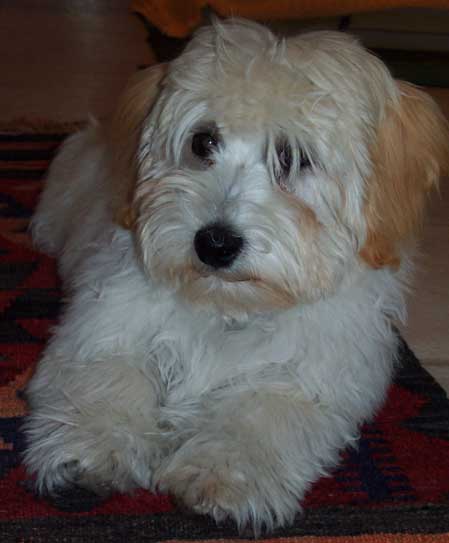 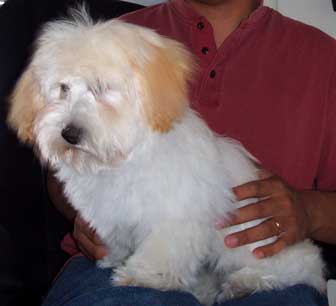 Mojo's getting a bath right now. Ela was a bit disurbed at how dirty he's gotten. "He's like a cloud of pollution."

Last night we went down to the local starbucks for a coffe, and met a boston terrier! Mojo was so funny. First he was looking at it, then we went over to say hi. The terrier was 4, and was pretty mellow. But it was shaking, because it wanted to go check Mojo out (it was leashed to a chair).

When the owner came out we sat around & talked, and Mojo and the terrier started to play. Mojo would bark, then they'd raise up, etc. It was really neat!

So I guess for Mojo to play, he first needs to feel comfy with the dog - he needs to approach the dog on his own time? Then he'll do the bow/bark/back & forth stuff.

We might not be able to get to the puppy playtime this thursday (bummer), but maybe the petsmart class'll start again?

Found some good pix. Looks like the camera finally adjusted to Mojo. Either that or he needs a bath (extra dirt = more contrast). 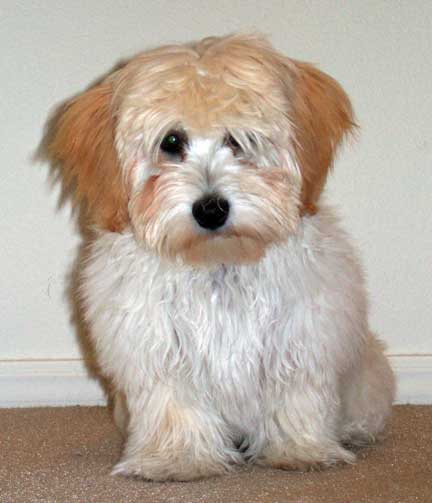 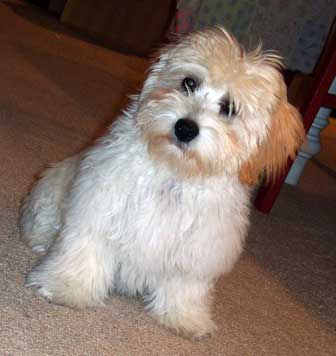 Ela got mojo to run around downstairs today by throwing kongs, balls, and socks. We were going to go for a walk, but Mojo was so tired he plopped down on the tile and fell asleep. Doh!

He gets his last set of shots today. Whoo!

Nothing much of note. I'll see if I can't dig up some more pictures to post today.

Ela cut Mojo's nails tonight, and we discovered that what we thought was a tooth was in fact a nail. How about that? Also all the nails on Mojo's right front paw are black. Who knows why?

The puppy playtime was kind of a bust. It was unstructured, and it was kind of "well, what do we do." Mojo was kind of shy, and was chased around by one of the other dogs. Besides that, he basically sat under our chair and watched. Some dogs came over to sniff him. Sometimes he'd walk around a bit to the people next to us.

I suppose he's just getting used to it, but to me it seemed like a waste of time. All we want him to do, really, is be comfy around other dogs, not be best buddies with them. After a few more sessions (2 or 3) we'll see.

Oh, we found something that might be one of Mojo's teeth yesterday. It doesn't really look long enough to be a tooth - it's maybe two mm long and a mm wide. I just looked, and it might be one of his upper front teeth, since those all look 'real.' His front 6 teeth still look babyish.

We're heading to puppy playtime tonight. It's a place for puppy socialization, so they can play with (and meet) other dogs. I suppose they can meet the owners too, but the important thing is the other dogs. Hamlet, from the petsmart class, should be there, which'll be weird.

Mojo hasn't been eating as much, since we weren't home a lot for the last few days. Now he's kind of skinny, which is very strange. He's still fluffy, but he's gotten a bit bony.

We run around with him almost every day now, with our complex's pool being our track. That way he can be off-leash but still enclosed.

A funny thing he's started doing in the last few weeks is playing with neat food/toys. If we give him a dingo he'll take it, then put it on the floor in front of him and look at it. Then he'll kind of roll over and look at it, then turn over on his back and look at it, then sort of play with it for a while. That's his "dance of joy upon receiving a new toy treat."

He's now sleeping on the floor next to our bed instead of his crate. I'm not sure when that started, but it's neat.

He's also started using the big beanbag as a chair when he's downstairs. Yep, that one, the one he used to pee on. Now it's his favorite seat (besides the cool tile). He keeps some of his toys on it and it's his place-to-flop. We moved the beanbag into the bedroom to see if he'll sleep on it and he'll nap on it but he prefers the floor (or a pile of clothes).

Shoot, I forgot: Mojo's jumping is starting to come in handy. He can jump from my desk to my chair, to the top of a file cabinet/storage box, then the floor. Yesterday he jumped (with prompting) in and out of a laundry basket. He had some trouble when there wasn't enough room to jump (he finally realized he needed some room), but he worked it out.

Maybe it's time to start looking into serious agility stuff?

Mojo seems to prefer walking around with his ears folded back. Either that, or his ears find a way to fold back and he's too lazy to flip them down. I suppose it's hard to hear when you've got floppy ears?

He's also got some kind of spots in there that are hard to make out. Maybe he's got ear mites?

We'll be taking him to puppy play-time on thursday, which should be fun. There's another hav there that's supposed to be really yippy, almost like a pomeranian (yuck). Hopefully he won't pick up any bad habits from her.

Some actual news! Mojo is now able to jump up on our armchairs!

This morning Llewelyn (Ela's friend) started yelling in an amused/frantic way. Mojo jumped up on the armchair! It's actually a fold-down sleeper armchair, like a sleeper sofa except the whole chair folds down, and it's around 2.5 feet hien wegh. Before, he could get his feet up but actually getting up on the chair was beyond him. Now, he can jump right up (and scramble with his hind legs). How about that?

He really likes to jump. When we play fetch, I throw his toy into this big purple beanbag chair. He runs towards the beanbag, then takes a flying leap into the chair then flumps right into it. He consistently jumps off the bottom of both sets of stairs now, and (as before) tries to jump off of every curb.

It's Llewe's last day tomorrow, and she said that she might pet or pick Mojo up tomorrow. Whoo! We'll see how that goes. He's been working on her for days, and he'll finally be successful!

''Mojo finally ripped the ear off of his stuffed dog! 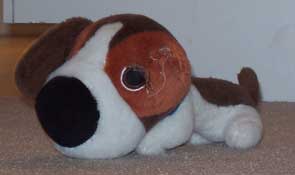 Here's a bizarre, up-close shot of Mojo running off with the ear. 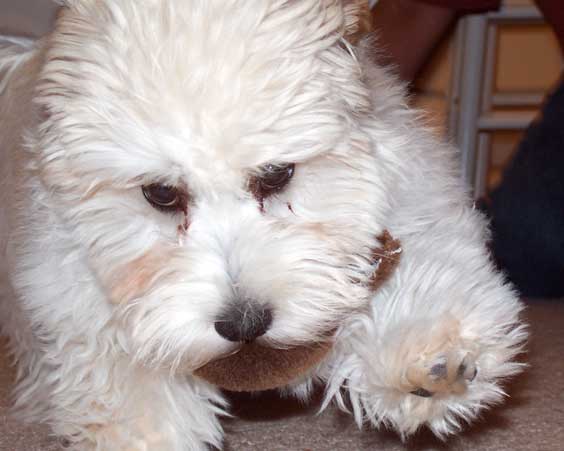 We have a guest, one of Ela's friends from Manila. She's been here for the past few days, and she has a dog phobia. When she was a kid, a dog bit her, causing a lifelong aversion to dogs.

Needless to say, Mojo's totally weirded out by her. He does tricks, stands up, etc to get her to say "hi", and she's like "uh-uh" and doesn't react in a friendly way. Then he's like "I wonder why she's not petting me?" Then he tries again, and the same thing happens.

It's rare that Mojo encounters someone that doesn't want to be friendly back, and he's never had someone in proximity for this long that hasn't responded to his entreaties. It's been a good education for him.

She's actually sort of warming up to him, because he looks so much like a rabbit. By the time she goes she might pet him, but we'll see.