Mojo's experencing some post-Ela stress. Last night he unloaded his bladder onto our comforter, and tonight he's pooped on the 2nd floor steps. The poo is understandable; it was kinda soft, so maybe he could control himself. He did make it to the bathroom and drop some of it on a pad. But the pee last night, well, we're not sure what's with that. Thank goodness we bought a bottle of Nature's Miracle a few weeks ago. It's been used quite a lot in the last two days, unfortunately.

It's funny, Heather (the owner of the Chins) was saying "just when you think they're housebroken..." We said something about Mojo to her about that, and well, here we are.

Mojo actually noticed that Ela wasn't here, but I don't think he really thought about it until a bit ago when I asked "where's mom?" Usually he runs around the house looking for her, and this time he was kind of frantic because he couldn't find her. Since we go out every once in a while, I think he thought she was around somewhere and he just didn't see her. He's sort of wandering around looking into the closets, bathrooms, and anyplace else she might be hiding.

Wonder what he's going to be like for the next month?

# posted by mannyv @ 9/09/2004 11:29:04 PM
Mojo's been barking because he's in a fear period! Or at least that's what we think. He's been barking at the weirdest things. He barked at a towel that was on top of one of our speakers. He barks at people outside. Just today, he barked at the linen closet.

He's supposed to have one around now (8 months?), so he's a little early.

The antibiotic is working! The red thing is almost gone.

In the beginning, he would just eat his pill. By the third day he'd chew it, then drop the pieces on the floor. To remedy this we've been putting the pill into a small strip of american cheese and feeding it to him. Mojo doesn't chew the cheese, so it goes right down.

Last night Mojo got to play with 2 Japanese Chins. One of them (Ming) was older (2 years), and didn't run around much. The other one ("Foo, aka Little Bastard") was Mojo's age and was a bundle of energy. They ran all over the circular park area for around an hour (maybe 1:15?). Mojo would chase Foo, Foo would chase Mojo, then Foo would run in these huge circles.

After that, Mojo was pretty much pooped.

Today was agility day, and Mojo & Ela did great. The start was a slow one, but after they got going they were trucking over all the obstacles. Mojo seems to have figured out the weave poles, and didn't seem to have much trouble clearing the one-foot jumps.

This agility class (by BarkZone) really is better than the Pup-a-Razzi one. Not because of the instructors, but because there's so much more space. When one dog is working on an obstacle you can watch, and you can wander off and run some obstacles while-you-wait. Plus the dogs have playtime together. Pup-a-Razzi just doesn't have enough space.

A quick wash before the grooming... 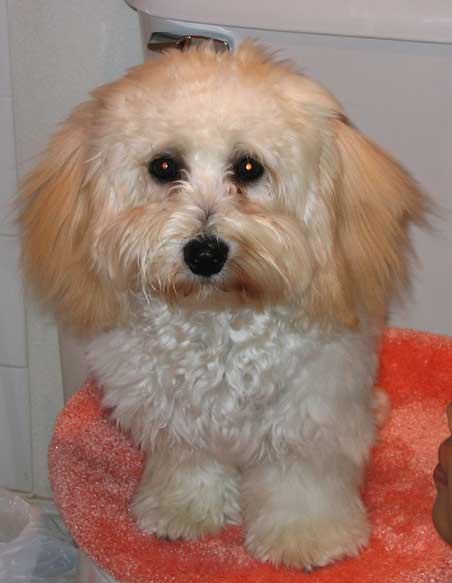 What a bundle of joy he is! 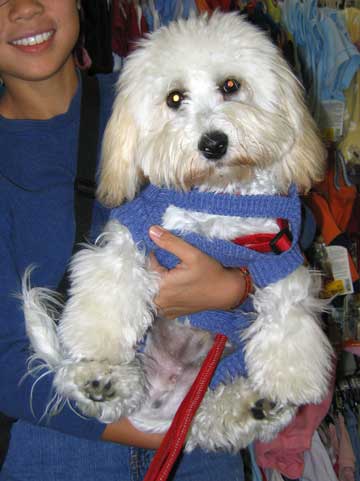 Did they say this was a turtleneck? 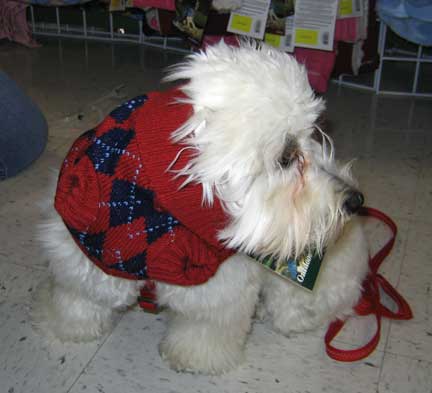 Red Velvet. It's the new black. 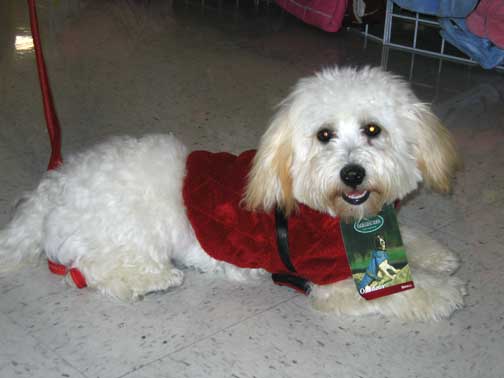 The Head of the Charles is soon, and it's important to accessorize. 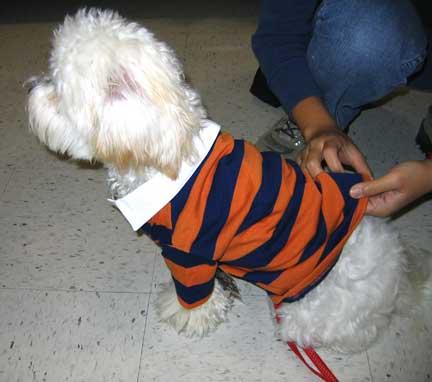 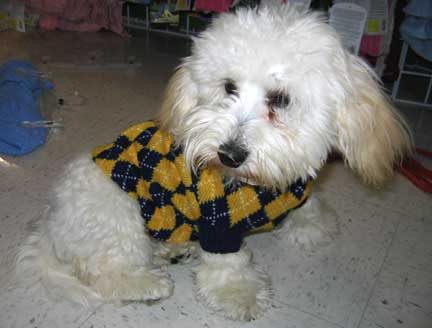 I suppose there's nobody I can call to report this, is there? 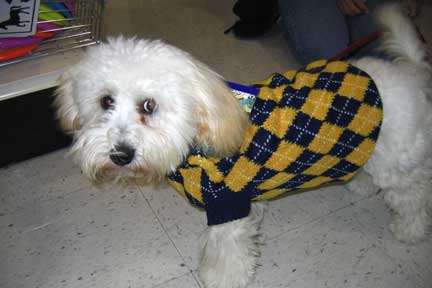 Hey, I'm just the dealer. It's not my fault your cards were terrible. 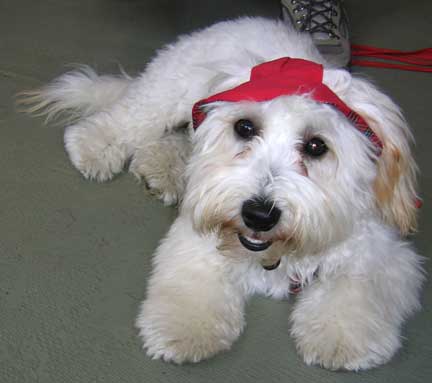 Riding in the backseat of the car. He likes the front a lot better, because it's easier to see what's happening (not that there's much happening). 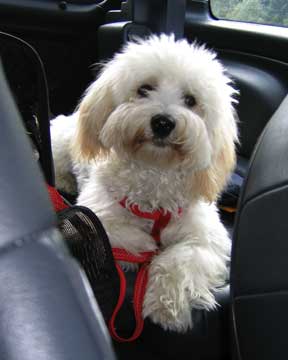 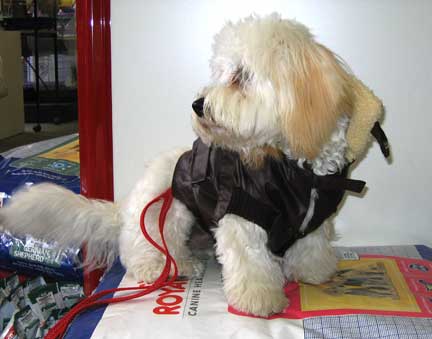 Hey, look at this really big Dingo that I just got! 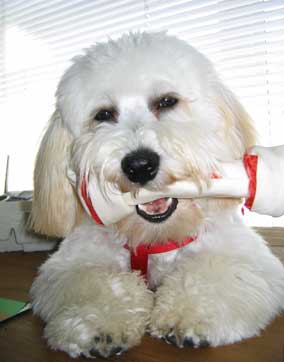 It's nighttime, and Mom's leaving on a trip tomorrow :( 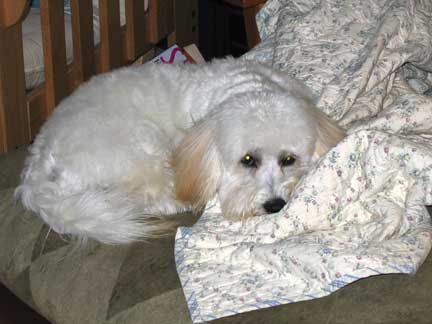 He's matting a lot. Before we took him to the groomer, we found a couple of mats. Most were on his lower jaw or on the back/underneath of his ear. Lots of mats is a sign his adult coat is coming in.

Then, after the groomer, we foundd some more small mats! Doh!

This trip should be the last trip to the groomer this year, unless we go off to warmer climes. It's getting cooler, so it should be safe to grow Mojo's coat long. We've never seen him with really long hair, so it'll be fun & interesting.

Mojo also barks more. Some new neighbors moved in last night, and the first thing that happened was Mojo growled & barked at their dog. Weird! On the way to the groomer he saw them and barked at them from inside the car!

We have to introduce him sometime soon, because it's embarassing that Mojo barks at them all the time. It's not like he's a Pomeranian.

Maybe, though, it's because he's been barking more. We got him to bark at the TV the other day. We watched a few minutes of the olympic equestrian event, and was able to get him to bark at the horses as they ran across the screen. It was funny, but maybe it's leading to more barking overall?