And three pads in the other bathroom works for the "I've got too much poo" problem. The downside is there's not much space left up there to step, but it's a small price to pay for not having to clean the floor every morning.

# posted by mannyv @ 7/10/2004 10:02:08 PM
Mojo's been losing teeth like crazy. We found one on the stairs, and another one popped out while we were playing. For the latter one, he was tugging, then kind of spat something out of his mouth. Ta-da! Then on the way to put that tooth into our collection I saw something white on the stairs, and boing! there was another tooth!

He seems to have his biting under control, mainly.

We're thinking of getting a cowbell that he can ring when he's hungry. He's been waking us up early in the AM. We think it's to go outside, but when we get outside...nothing. If he can ring a bell to go potty (he's been pretty good about that, I think he's got the idea) he can ring a cowbell when his food's empty.

We went to the prarie cluster of dog shows and saw a bunch of Havs. None of them looked as nice as Mojo :) but it was nice to see other Havs. As everyone there said, "you can't have just one."

We found another tooth! This one's a real molar-like one, maybe from the other side of his mouth?

The bell-ringing seems to be working, sort of. I think he's starting to realize that the bell is for when he wants to potty outside, because we keep asking him that after he rings it ("go potty?"). I saw him think about ringing it then stop, but I'm not sure why yet.

We'll see tomorrow. No matter what, he poops in the AM before we're awake. Lately he's overflowed the pads, so I've got three pads down to see if that'll take up the slack.

The other day we got Mojo to jump into a laundry basket. He did it before, when he was smaller, so we tried it again. With much barking and encouragement he finally jumped into it, then out of it. Whoo!

It's funny how worked up he gets when he's not quite sure how to do something. He barks, then stands up and looks at it, then looks at us to say "what?"

Maybe we'll just ask "do you want to go potty?" when he rings, and if he says something that could be interpreted as a "yes" we'll go out?

We were at agility class yesterday, and Mojo did great!

During the session, we went through each obstacle one-by-one. So there was a line of dogs at each obstacle, waiting to go over. The first was the tunnel (bent so you couldn't see through it), then the see-saw, the tire jump, the a-frame (but elevated now), a table, and a jump.

The see-saw was easy; all he had to do was run over it. Dogs have trouble when it tilts, but Mojo's problem was staying on it (he wanted to jump off before he got to the end). The other dogs had problems with it, so it wasn't really elevated. We'll see what Mojo does when it's at full-height.

The tunnel was fun; he ran right through it no problem.

The tire he had problems with. He wanted to go around it first, then when he did jump through it he took off after abbey the chocolate lab. Doh! Next time through he ran to Ela, who was watching. The rest of the times he was fine.

The table is new; the dog has to jump onto it then sit or stay for five seconds. Mojo was fine with that, but when he sat he tended to lie down. Gotta work on that. A "sit up" got him to sit up, but he should really sit up all the time.

The jump was no problem, really.

The a-frame was fun! He scrambled up the back of it, then went right down the other side. No problem!

Mojo pooped on the floor during class, which was a first. Luckily poo-bags and Nature's Miracle were nearby.

During the run-through at the end, the sequence was a-frame/tunnel/seesaw/tire/table/jump, and Mojo ran through it completely. The only problem was he didn't quite sit down for 5 seconds on the table, but that was OK. Amazing! He's like a white, fuzzy bullet out there on the course.

One thing about agility that they told us (and sank in) was your position is as important as your cues. During the run I was out of position going into the tunnel, which was kind of awkward because I had to change direction while running...and without getting Mojo to follow me. It worked, but it was messy.

One of the trainers also said he'd make a good therapy dog, because he loves people, he's small, soft, and confident. I guess it's something to look into?

We found out why Mojo hasn't been gaining weight: his eating has slowed down due to his teething! He can't eat as much dry food because, well, he doesn't have enough back teeth to eat with anymore. At least we think that's the case.

We noticed after Ela made him some wet food (soaking the kibble w/water, mixing in some salmon etc). He snarfed it up, and the light turned on. We've been so busy we didn't really think about his lack of eating, I guess.

So tonight we went out and picked up some wet food for him, to tide him over. His gums bleed occasionally (not sure why), which seems to be a teething thing. Poor Mojo.

We took him out to the park and he finally got to run around again. He really loves running around, and he's gotten a lot faster (or we've gotten slower, which is more than likely). We've been lucky that nobody's been in the park, since he's supposed to be on-leash. He is on-leash but we're not holding it, so that probably doesn't count. We always call him in if we see someone, hopefully we won't get busted :|

That's all for today!

Sleeping on my desk again. 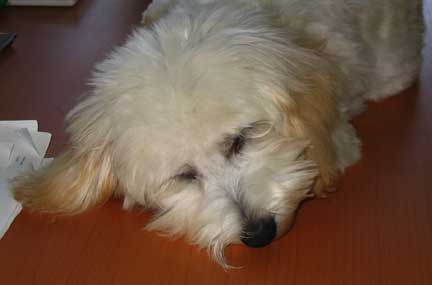 Looking up at me. Can I come up onto the desk? 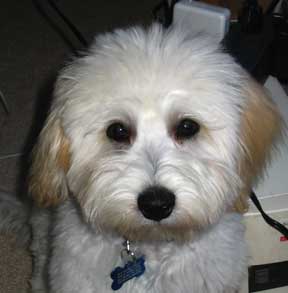 Mojo, the potato, and the beaver in action. 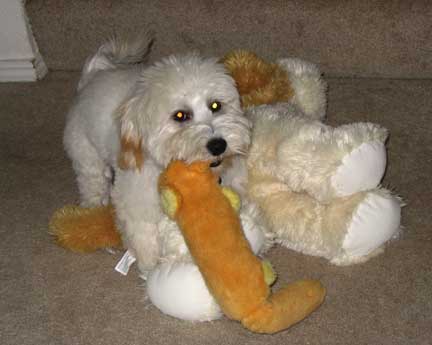 A lamb bone from the market. Yum!

Last week he shredded one of our papers. He's looking less-than-sorry about it. In fact, he looks annoyed that he was interrupted! 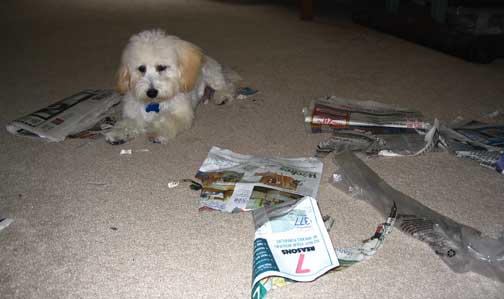 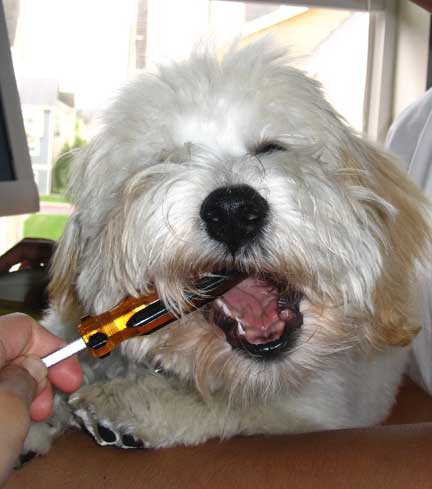 At the Saturday Market. 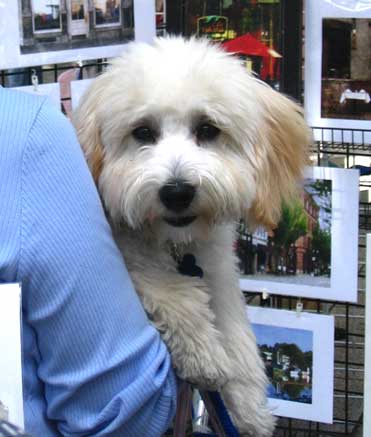 We gave him a hard-boiled-egg one day, just to see what he'd do. He didn't really know what it was. He played with it for a while trying to figure out what it was. He'd carry it around, roll it around, and lick it. Finally he licked it enough to get to the yolk, realized it was tasty, and then he just ate the whole thing.

It might have been bad, because it might have taught him that if he keeps playing with an object it'll turn into food. It was pretty fun to watch, because of the confusion on his face.

This is a side-profile of Mojo. He looks kind of weird at this angle, and he's got quite a hunch. The hunch means no breeding for him...not that we were going to, but still. Maybe it'll de-hunch in a few months?

His head is also really big relative to his body. Maybe it's just the lack of hair? 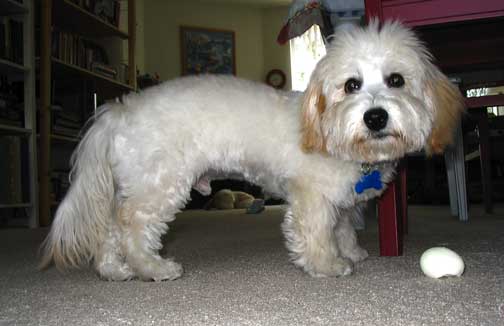 Outside on the grass. 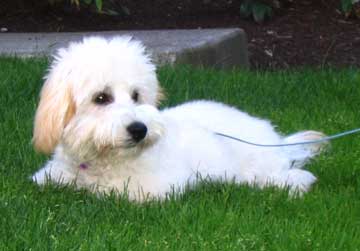 A Mojo note: Mojo loves to groom me. When he's close, he'll lick my face, but what he really loves is licking and biting my ears. He did this to my dad, but not to my mom or wife. For them, he loves their shoes. Why? Who knows?

Also, Mojo's 11 lbs today. No gain since last time. He's been eating less, maybe because he's not getting as much exercise since the parents were here. They're gone now, so we'll be able to find time to run him.0.

Mojo's been doing something funny the last few days. When we go out and walk, he'll sniff around as usual, checking out all the smells. He never seems get tired of smelling the same old bush, plant, or patch of dirt.

Now, though, he's added something different: if he sees a bird hopping around on the ground, he'll go into an alert position (head up, and either standing and ready to go or sitting, tensed). Then he'll run at the bird, trying to catch it. He has no chance because he's dragging me or Ela behind him, but that doesn't stop him. We gamely run behind him holding the leash while he runs in big circles, chasing a robin.

He started doing this yesterday or the day before? I'm not sure what he'd do if he got one, but I'm not worried: it's hard enough for a cat to catch a bird, and Mojo's no cat.

We got Mojo a new toy: a nylon rope tied in a loop, from Home Depot. The nylon rope was cheap, .35/foot. 5 feet tied in a loop makes a nice tug toy. The downside right now is his gums are a bit soft, and bleed a bit.

We also picked up a hula hoop and a board for agility practice. He does "target" really well, and will "lie down" while running - if he's on grass.

It's been a while, so here are some random updates day-by-day.

Parents arrive. Mojo seems to remember them, but he's so excited meeting new people that it's hard to tell.

Agility class! Today he learned the tire jump, the long plank (he has to walk down it), the tunnel again, then the jump. We did the rounds of the equipment a few times while Ela was talking to the instructor, with the leash trailing behind him.

With the tire, he didn't jump the first two times, but by the end he was jumping through it most of the time. He wants to go around it, I suppose.

The plank is easy (he walks up onto it and gets off easily). The problem is he might not get on at the beginning and get off at the end; he tends to jump on and off instead of walking up & down the ramp.

The jump is fine, as long as I say "jump." The first time he went around it, but when I jumped over it he followed. Can't do that in competition, though!

The tunnel he's good at, but he stopped in the middle of it once. Weird...he was just kind of sitting there, panting.

Went to the portland farmers' market and the saturday market. By the time we got to the market Mojo wanted to be carried. Geez!

He's getting along better with dogs; he goes up to them & says "hi" and will stand on his legs to greet them if he thinks they're too big. We're actually not sure why he stands up to say hello to other dogs, but he only seems to do it to bigger dogs...and to the smaller dogs that stand up.

Most of the time Mojo was at home, doing Mojo things. He always looked kind of sad when we went out, because he couldn't go with us. And he was always happy when we got back, because we were there.

This is the molar (pre-molar?) that Mojo lost the other day. The dime is there to show scale. 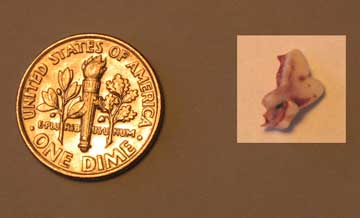 No posts lately, but Mojo just lost one of his upper right premolars. He was tugging, then suddenly ran away. We looked down, and there it was!