We brought Mojo to the vet today. Good thing - the vet said that it was either an infection (ick) or an allergic reaction to the sutures (uh-oh). We have 10 days of antibiotics, and if it doesn't start subsiding in 3-5 days then I suppose it's an allergy.

I think the bad news is if it's an allergy, they have to remove the internal sutures as well.

It might be an infection, because it really doesn't bother Mojo at all. I'd think an allergy would bother him more. 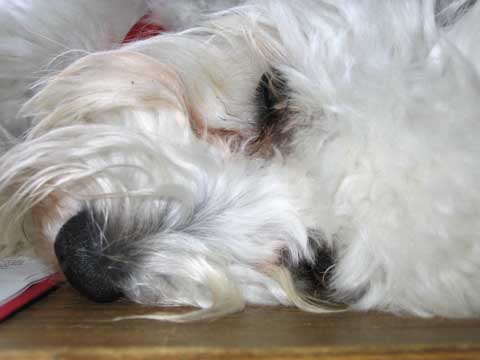 This is what Mojo looks like when we leave him at home. He looks down at us in the stairwell and asks, "you're leaving without me?"

He's got another look: he puts his head down on the top step. We'll get that shot soon. 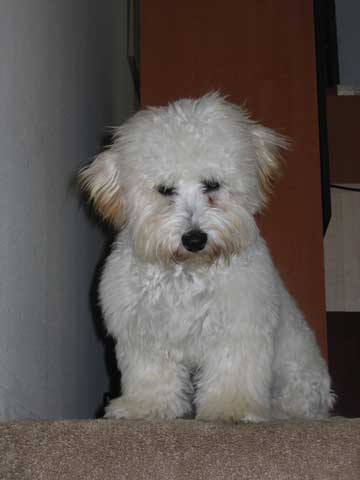 Mojo, waiting for us to do something. "Yes?" 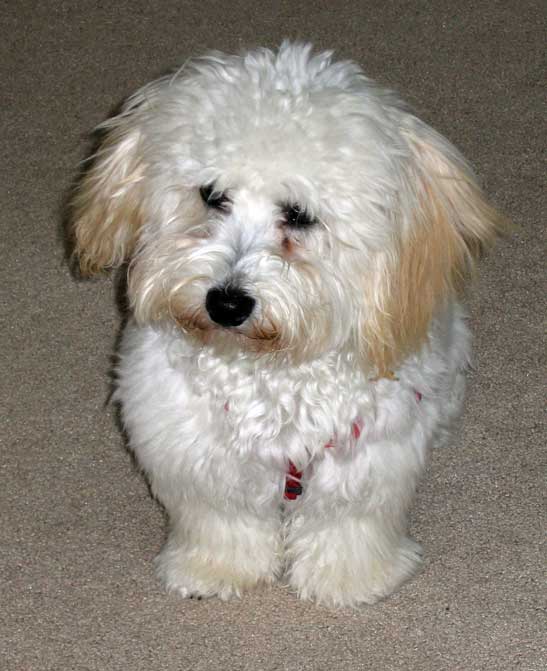 The other day, we were downstairs and Mojo suddently went over to the screen door. He went "ruff ruff" a few times, then broke out into real growling and howling. We were really surprised; it was the funniest and strangest thing. Apparently someone was walking on the path outside, and Mojo tends to growl when he sees people at night anyway. Those two brought out...what, the aggressive Mojo? Guard Dog Mojo?

He went to agility yesterday for the first time, and had lots of fun. He played with dogs again, and got to run the course with Ela.

Oh, the day of his howling we saw Plop and "Chicken," a minature Pincher. Chicken said hello by grabbing onto Mojo's jaw and not letting go, making their encounter a short one. Mojo was OK, but Ela had to restrain Chicken while Mojo & Plop played.

Today he was at daycare all day. He was kind of groggy in the AM, and he wasn't much better after daycare. Right now he wants to tug more.

He's actually been kind of a pest for the last few days (before agility). Keeping him inside has made him pretty annoying. He chewed up Ela's phone, and he's been invading the bathroom trash cans and gnawing on the contents (yuck, gross). He's tried to eat a few magazines, and he's been bitey etc.

According to Ela, he only bites me, so maybe he's not so bitey.

He goes in for grooming on Sunday - possibly his last cut before winter. His coat has started getting drier, which might be a sign that his adult coat is slowly coming in. It also could be because we're giving him a variety of foods now - Wysong, Chicken Soup (adult and puppy), Eukanuba (we've got a lot left), and various wet foods.

We'll be going to the vet tomorrow to see what that thing on the incision is. It looks almost like a burn scar or something like that. Very strange.

Today was a bit more relaxed than yesterday's windsprints. We went down to the Pearl District with Mojo, to find some booties and rainwear. First we stopped at LexiDog, which has more high-fashion types of stuff. Some booties just didn't work, but one set (pictured) seemed to stay on pretty well.

Next was Urban Fauna, which has good everyday (but nice) stuff. Mojo got to try on some raincoats and jackets (the rainy season is coming).

Last was REI, where they only had one set of booties that kept falling off. Keeping them on seems to be the biggest problem, since if the dog doesn't try and remove them himself they fall off due to poor grip (or whatever you call it).

Then it was off to Ben & Jerry's for some ice cream, then home.

For mojo it was a fun day. He met a bunch of people and got to play a bit with other dogs, and he was able to walk around in a totally new part of the city, one that had lots of new & different odors.

Best of all, he didn't barf in the car!

Our second attempt at dog booties, courtesy of Target. 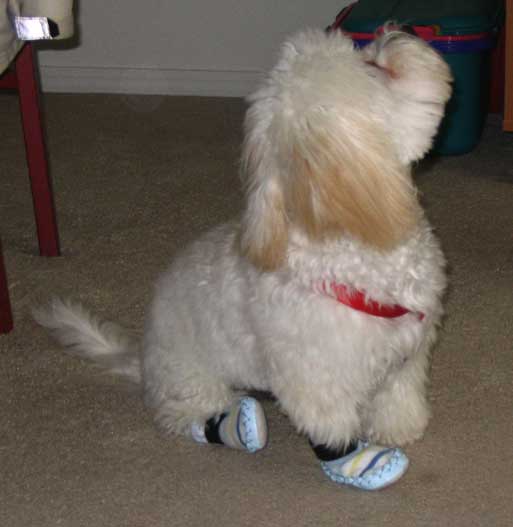 Mojo in an unguarded sleeping pose. 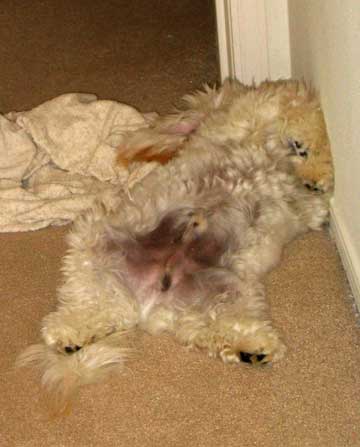 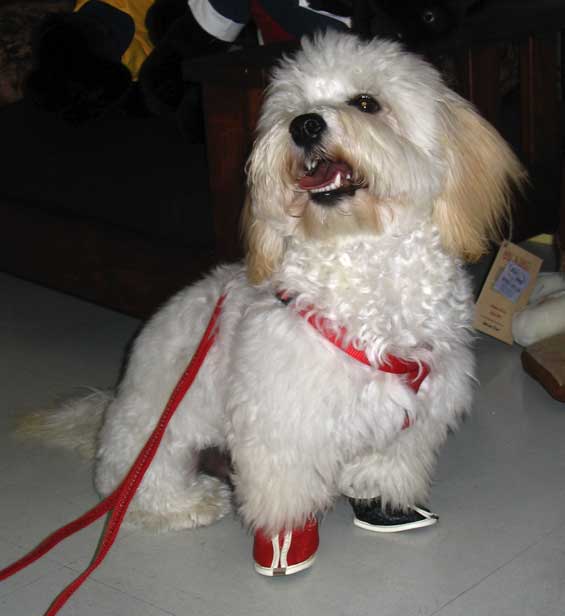 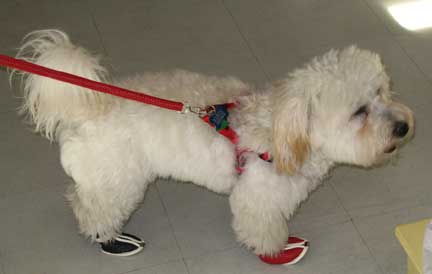 Checking out the clearance toys. 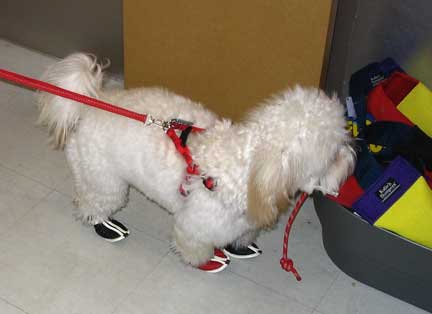 This, unfortunately, was the only raincoat picture we had :( He looks like Long John Silver. 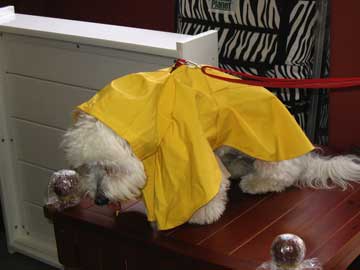 Well, it's sunday AM, and it's been a few days.

The paw licking might have been from the turkey, since after we ran out (two feedings) he stopped the licking. Go figure, huh?

Yesterday we found a weird scab/wound on Mojo's neck. It might be a needle hole from the anesthesia? Who knows. There's also a red weal thing on his incision, so Monday we'll head into the vet and have them checked out.

In other news, Mojo's biting like crazy. It's driving us crazy trying to control it. We're not sure what the deal is, but we're trying to stop it.

Hmm. We got a block of extra sharp cheddar, and Mojo really loves it...more than the lamb sausage. We'll use 'em for treats if/when he goes to agility. We had him run all over the place, running through the tunnel & doing tricks, all for a few chunks of cheese.

We took Mojo to the park today for the first time since the operation. We sprinted back and forth a couple of times (and got totally winded...Mojo can outrun both of us, consistently). Then Mojo met a terrier, and they ran around for a few minutes. Fun!

When we went though the park (on the path), we let Mojo off-leash just to see. He had a leash attached, but we weren't holding it. He did pretty well, staying within range and coming (mostly) when called. Whenever he didn't pay attention, we'd just turn around & he'd run back to us :)

We're sort of confident about his off-leash ability, but I think if he saw something small & fast running away he'd chase it for sure. We'd have to run the other way, and it's unknown whether he'd come chase us or keep going...