Mojo napping on our bed. 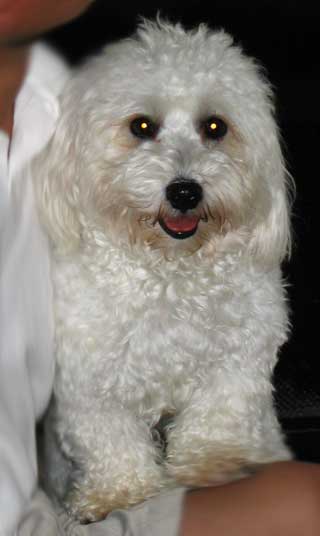 This has nothing to do with Mojo, it's just a funny sight we saw in a parking lot.

What's interesting is that he doesn't really lift his leg - he lifts his foot. Usually when he pees he has all four feet on the ground, and he sort of stretch/lowers his pelvis. When he marks he does the same, except that he lifts one of his back feet off the ground.

Right now he marks on the grass, especially those big tufts of grass that are irrisistable to dogs. I think those tufts are the equivalent of fire hydrants for small dogs. Mojo will, if he gets the chance, mark the same tuft of grass on the next go-around...after sniffing it, of course. Guess he didn't finish the job the first time?

Saturday we brought Mojo out to 23rd street. He loved walking around and saying hi to the people, as always. The fun thing was at the Junior League store: there was a pug inside, off-leash. After a slow start, Mojo and the pug (named "Betty") started playing. They'd run around, bark at each other, and lick each others' faces. It was funny, because Betty would be wheezing (pugs can't run much, apparently), then she'd take off. Mojo would go chase her, then Betty would jump into her mom's arms and things would stop. Then Betty would run around again, etc.

I guess some dogs just get to be off-leash. It's not like it could hurt anyone, though you might trip over it.

It was a neat thing, though. We'd never seen Mojo lick the snout of another dog.

The next day we went shopping, and left Mojo tied up outside the store - another first! The front door of the store was open and he was mostly behind it, so he couldn't run off or jump out at people. He did pretty well, and it was so funny watching him peering into the window trying to see us. After a while he'd start whining a little, but overall he did pretty well. I'm not sure how he would have done if there was more traffic outside (or people trying to pet him), but he was fine for a good 30 minutes.

We'll try again another time. The problem really isn't that he might jump on (or attack someone); the problem is he might get stolen or something like that.