The daycare was a success!

The first few hours of daycare is an evaluation, to see if your dog is mean, violent, anti-social, etc. For the first two hours or so Mojo just sat on the bench in the dog area. Other dogs would come up & sniff him, and he'd sniff them back. Eventually he got bored, I guess, and went off to play with the other dogs.

This is great, because now we have somewhere to put him if we go somewhere. They do boarding as well, with the average stay time usually being about a week or so (though there's a dog that's been there for a month).

He seemed to be in shock when we picked him up, like he was saying "what was that?" He peed on their mat on the way out (oops) then pooped outside. He ate when we got home, and he's been asleep since. Is he tired because of stress? Or was it a lot of activity? Probably both.

He was fine with the bigger dogs, according to the woman there, which is a good thing. We were thinking of just giving up on getting him big-dog socialized, and living with the fact that Mojo + big dogs = bad. But when he's got enough time to get used to them (off-leash), he seems OK. We're not about to let him run free in the park, but at least if he's supervised it's OK.

Mojo, chilling out in barkzone. That's him on the bench in the center of the frame. The other dogs are in the foreground, doing something or another. 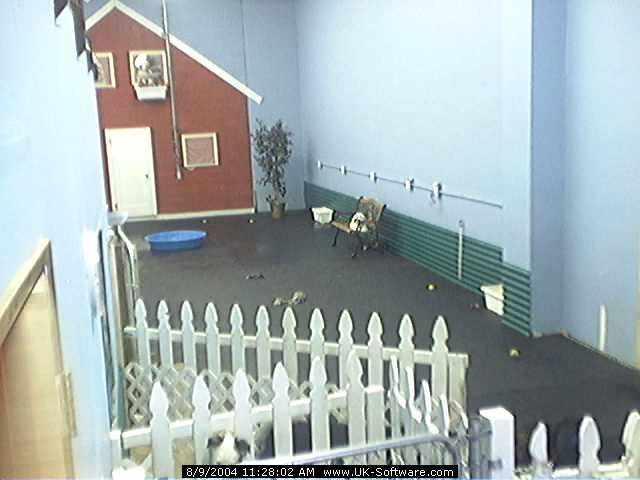